I will be teaching graduate growth and development this fall, and I'm trying to get a head start on my reading list. Today's effort is looking at the relationship of agriculture to overall economic development.

I think a really convenient way to see the main issues in this literature is the following figure. It plots output per worker (in logs) in both the agricultural and non-agricultural sectors against the share of labor in non-agriculture. Moving to the right, then, is associated with industrialization and/or structural transformation, whatever you want to call it. The data is from Francesco Caselli's handbook chapter (data here). 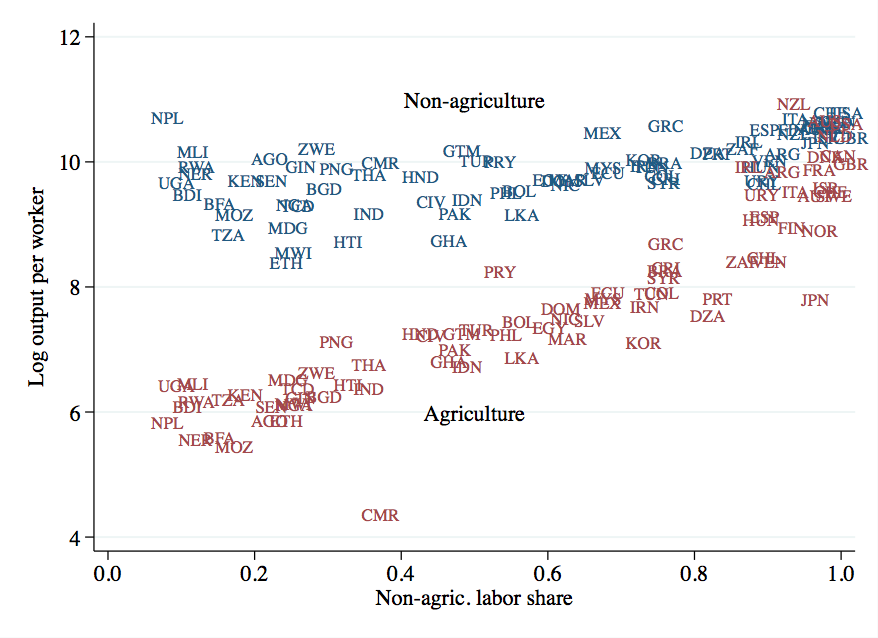 In thinking about why some countries are rich and some are poor, these stylized facts are of first-order importance. Standard one-sector growth theory sweeps all this under the rug. The papers I teach in this area take these facts as a jumping-off point. They generally work with a model that has a low income elasticity for agricultural goods (Engel's Law), so that as productivity goes up in either sector, labor is pushed/pulled out of agriculture. Other papers take off from this to consider the existence of the productivity gaps, either trying to account for them more accurately, provide some explanation for their existence, and/or explain why they disappear as countries industrialize.

The reading list itself can be found on the "Papers" page on the site, below the introductory papers. It includes both a pdf and a BibTeX file.