Writing this post was kind of depressing, because all it did was highlight for me how many things I’ve got in my reading list to think about and digest. I was reading Brad DeLong’s recent post on manufacturing’s share in output, and realized that I’ve got about four more posts from Brad stacked up in the queue, along with all the other stuff I’ve been meaning to read more carefully. So, respectfully, Brad, please stop saying interesting things related to growth. I need time to catch up. How about a nice run of posts about the history of monetary policy or something like that?

DeLong’s motivating fact(s) are about manufacturing’s share of output, both in nominal and real terms. He grabbed the following from the BEA 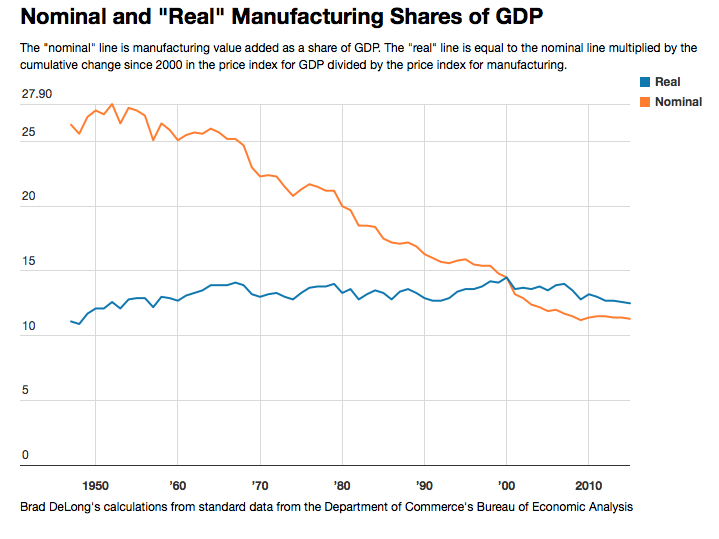 and developed the path of the real share by making a crude calculation. As he freely admits in the post, this isn’t exactly how one would want to calculate the real share of manufacturing in output. But, for the purposes of his post, I don’t think it makes a huge difference.

Anyway, he establishes three main facts that he wants to understand. First, note that the nominal share of manufacturing in nominal output has been declining steadily since the late 1940’s. He gets a value of -1.4% per year as the growth rate of the nominal share. Second, the relative price of manufactured goods (compared to aggregate output) has been declining by -1.4% per year as well. This gives us the final fact, that the real share of manufacturing in real output has not grown (or shrunk) over time, as you can see in the figure.

DeLong then proceeds to ask himself how to reconcile all of these three facts. What must be true about demand and/or technological change to explain this? And he will come to a conclusion that we are probably not measuing the price decline, and hence the real share of manufacturing, correctly. That will in turn imply that real economic growth has probably been understated over this entire period of time.

I think DeLong is too quick to make that conclusion, and that there is in fact a way to understand his three facts that does not imply economic growth has been understated. My brain moves a little slower than DeLong’s, so here’s how I worked through his reasoning. First, let the following be the demand curve for real manufacturing goods, in log terms

Add $\ln P^M$ to both sides, and subtract $\ln Y$ from both sides. That leaves me with

To work with this in DeLong’s terms, it will be easiest to talk about growth rates of all of these items. And with everything written in log terms, getting growth rates is straightforward. Let $\hat{q}^M$ indicate the growth rate of real manufacturing goods, and define a similar “hat” term for each element of the equation. We’ve got

Then he goes to work trying to understand how all of those facts can be true at the same time, given the above equation. Here are two possibilities that DeLong dismisses as not making sense - and I think he’s right to dismiss these possibilities.

DeLong then asks how this is all supposed to work if we instead assume that the income elasticity is 1, the price elasticity is something more reasonable like 1/2, and we dismiss the idea of a purely exogenous shift in manufacturing demand. And this leads him to a problem with reconciling the data. With those assumptions, it means that the growth rate equation is

With the relative price of manufacturing falling twice as fast as we thought, and real manufacturing output growing relative to real output, this implies that we really are better off than we thought. I won’t get into the mechanics of this calculation here, as the post is already getting long, but it would imply that real output growth was actually about 0.3 percentage points higher per year over this period. Real output grew at about 3 percent per year, so that’s a pretty big difference.

But here is where I think DeLong’s gone one step too far. He focuses on the price elasticity, but assumes the income elasticity is equal to one in all cases. His alternative scenario where growth in the real manufacturing share and faster true growth in real output is contingent on this assumption. Let me propose an alternative way of reconciling the numbers that doesn’t imply anything is mismeasured.

Let’s use DeLong’s price elasticity of 1/2. I don’t have any strong reason to quibble with that number. And let’s retain the assumption that there is no exogenous demand shift. But rather than assuming the income elasticity is one, let’s leave it as a free variable. So now the growth rate equation is

Take the original facts as correct, and let me add one additional fact. The growth rate of real income reported by the BEA over the same time period as DeLong is working with is 3% per year. This is the growth rate of aggregate real income, not per capita. Putting all this in our equation gives me

Is that reasonable? I sure think it is. It’s entirely consistent with the literature on structural change for rich countries like the US. Income elasticities for manufacturing less than one reflect people’s preferences having some kind of “limit” on the amount of manufactured goods they want to consume. I’ve used the refrigerator example before. If we get even more productive at producing refrigerators, then they will become less costly and/or become higher quality. But that doesn’t mean I’ll buy another one. I’ve got two at my house already, and it would take a massive drop in price or increase in quality to get me to buy another one, even just to replace the existing ones. Similarly, my income is due to go up in October thanks to the raise pool at UH this year. I’m not using it to buy a fridge, or probably many manufactured goods at all. I’ll use it to help pay for a trip we’re taking in December.

DeLong could still be right, of course. This is all dependent on competing assumptions about the size of elasticities. If the income elasticity is actually one, then DeLong’s story is more plausible than mine. I think I’m on the right track, but I don’t have the time at the moment to collect various references to back up my income elasticity argument.

One last interesting note. The income elasticity doesn’t have to be constant over time. In fact, I’d guess it was closer to one, if not higher than one, back in the early part of the period DeLong considers, the 1940’s and 1950’s. If the income elasticity is bigger than one, then this means DeLong’s adjustments for that period would be even bigger than what he calculated in his post. I have to think harder about this, but I’m wondering if this is some way to reconcile/explain Robert Gordon’s facts about rapid measured productivity growth in those decades relative to the current period of time. Stay tuned.