I guess we need to go over this again. No, cuts to corporate tax rates and/or the reforms/cuts proposed on individual income taxes will not boost economic growth in any appreciable way. Not to 4%, nor 4.5%, nor 5%. There is no evidence supporting this claim. And even theoretically, there is no reason to believe that these tax reforms/cuts can boost growth to those rates. 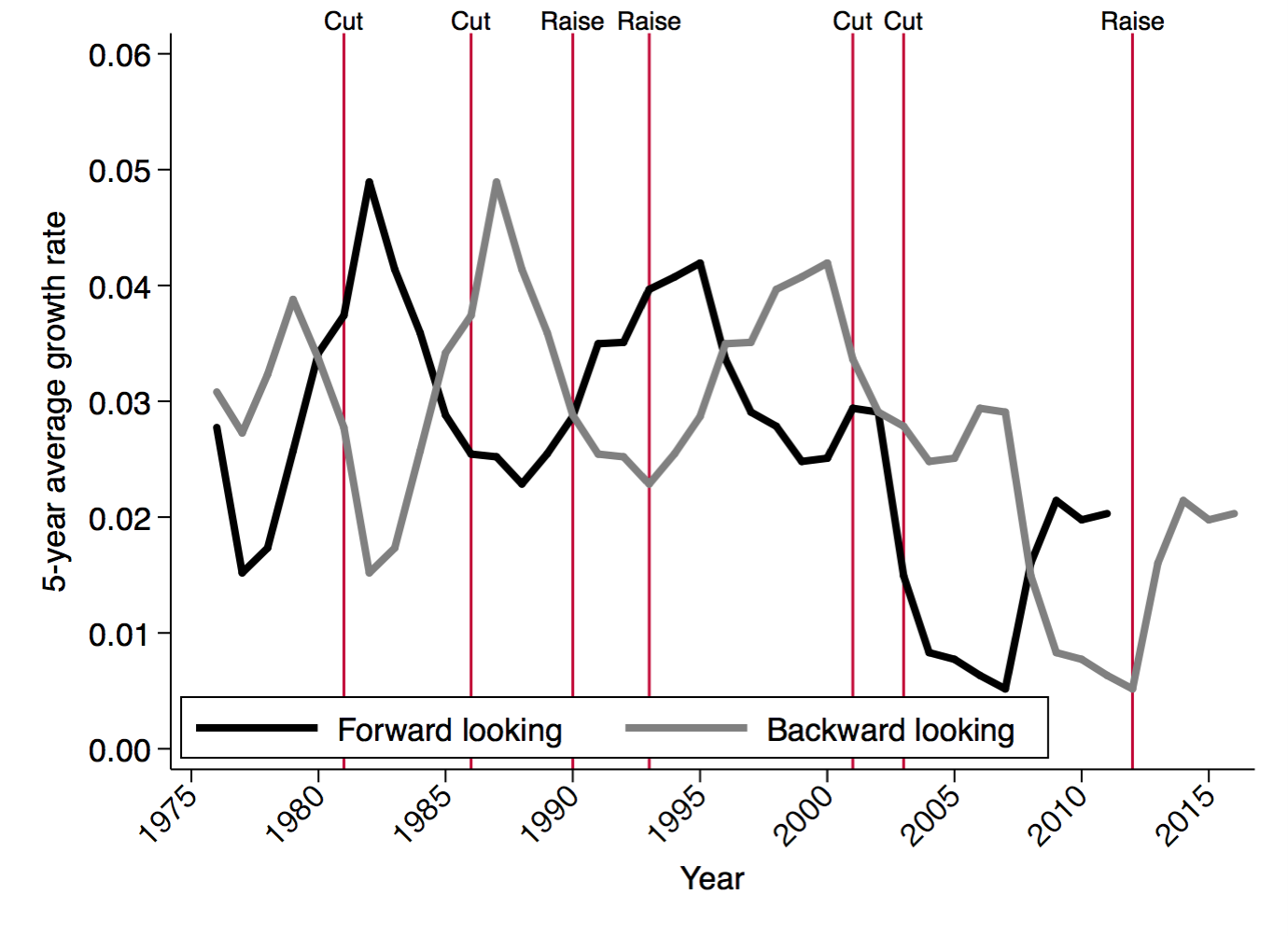 Also on the figure are red lines indicating when significant tax legislation was passed, and whether it was considered a tax cut, or a tax increase. 1981 and 1986 are the “Reagan tax cuts”, 1990 is the Bush tax increase, 1993 is the Clinton budget agreement that raised top tax rates, 2001 and 2003 are the younger Bush tax cuts, and included the 2012 “fiscal cliff” agreement under Obama that raised taxes on those earning over 400,000 per year.

What you can look at is whether the forward-looking growth rate differed appreciably from the backward-looking one. If the argument about tax cuts stimulating growth is correct, then you’d expect to see that the forward-looking rate exceeds the backward-looking rate. In 1981, this looks true. Growth from 1981-1986 was about 3.5% per year, versus 2.8\% per year in 1976-1981. But examining the other tax cuts, you’ll see the opposite is true. In 1986, growth was slower after the tax cut than before. In 2001 and 2003, growth is lower after the tax cut than before. For the 2003 cut, the difference is very striking because of the onset of the financial crisis.

In contrast, look at the three tax increases. For Bush (the elder) in 1990, there was essentially no difference in the forward and backward growth rate. For the 1993 increase, growth was much higher after the tax increase than before, and for the 2012 increase we’d need to get data through the end of 2017 to make the same comparison. But for what it is worth, growth in the four years from 2012-2016 has been a shade over 2%, meaning it is much higher than the five years prior to the tax increase.

You cannot take this as any kind of definitive proof of anything, of course. Tax cuts may boost growth, but each time we passed a tax cut it just so happens that some other big negative shock hit the economy at the same time, masking those positive effects. That’s … possible. The more likely answer is just that substantial tax cuts have small effects on economic growth. On the other side, the last time we averaged 4% growth over a 5-year period was the late 1990’s, right after the tax increase of 1993.

Aside from the smell test, this isn’t a new question, and people have picked around at the relationship of tax rates and growth rates before. I reviewed a few studies in an early post here on the blog. Short answer, there is no relationship of the tax rate to the growth.

Taking this same question on from a narrower pespective, Menzie Chinn has a recurring series of posts tracking Kansas’ economic growth and employment since Brownback became governor and signed off on a massive tax cut. The short version of these posts is that employment and growth in Kansas has stagnated and/or outright fell since the cut. There are several similarities between the Kansas cut and the one proposed by the current administration. Most notably, lowering the tax rate on “pass-through” income from partnerships and proprietorships.

The lower tax rate on pass-through income was supposed to generate a burst of growth in Kansas. The TL;DR version of Menzie’s posts is that it hasn’t happened, which you can probably tell from the post titles.

Why don’t tax cuts boost growth by much?

Ok, the evidence doesn’t support the idea that tax cuts boost growth, but at least theoretically it’s true, right? Kinda sorta. Smarter people than I have tried to estimate how sensitive people’s work efforts are to income tax rates, and they find very, very small effects. The main effect of changes in tax rates and/or reforms is that people with the means to do so shift the legal definition of their income (e.g. from personal income to profits at a proprietorship). The effect on hours worked is very small, and that is the margin we’d care about if we want to study economic growth. From the corporate side, there isn’t any evidence that the 2003 dividend tax cut had any effect on corporate investment, or on labor earnings. Rather, the dividend tax cut generated a substantial amount of payouts to existing shareholders.

But let’s say that these guys are all wrong, and this tax reform/cut proposed by the current administration is * different. For realsies, it is going to incent lots of firms to invest more, employ more people, and stimulate the economy. *That is going to boost growth to 4%, or maybe more, right?

I’ve been over this before on this blog, and now that I have my handy Topics pages, you can go see all the gory details here. The short story is that tax cuts/reforms change potential GDP (possibly), and it takes a long time for us to converge from today’s GDP to that potential GDP. The analogy is to think of GDP like your weight. If you cut “taxes” on your weight by exercising less, then you will gain weight. But not all at once. It will take months or years to reach your new potential, heavier, weight. The same thing happens with GDP.

Even if you think the effects of these tax cuts on potential GDP are massive, which is unlikely, you can’t generate significant changes in growth rates. There are several posts on the Topics page that do this, but let me repeat the basic calculation. Real GDP in the US is just about 17 trillion (2009 chained) dollars as of Q1 2017. A generous estimate of the current growth rate of real GDP would be about 2.5% per year, without the tax cuts. Now, let’s say the proposed corporate and individual tax cuts/reforms raised potential GDP to something like 18 trillion dollars. In other words, what if there was 1 trillion in extra economic activity that was not taking place because a bunch of people have John Galt-ed themselves out of investing or working due to the current tax system?

How much faster would growth in real GDP be after the proposed tax cuts/reforms? To figure this out we need one extra piece of information, the convergence rate. This rate is the percent of the gap between current GDP and potential GDP that closes every year, and it is commonly estimated to be about 2%. In the weight example, if your current weight was 150 pounds, and your potential weight is 300 pounds thanks to your cut in exercise, then this 2% convergence rate says that in the first year, you will gain .02(300-150) = 3 pounds. And next year, you’ll gain .02(300-153) = 2.94 pounds. And so on.

Perhaps you’re worried I’m underselling the effects of the tax cut itself. So let’s say that the proposed reforms raise the potential GDP of the US to 19 trillion - which is ridiculous by the way - but whatever. With a 2% convergence rate, that would lead to a growth rate of … 2.73%. How about potential GDP of 20 trillion, meaning that tax rates alone are keeping GDP three trillion under where it could. Then growth might hit … 2.85%.

The fundamental issue here is that it takes time for all that pent-up investment (if it exists) to manifest itself. Firms cannot expand production overnight. It takes time to generate the plans for a new location, or plant, or product. And this all assumes, contrary to the available evidence, that there are substantial effects of tax cuts or reforms on the willingness of firms to invest and/or people to work.

There is no magic elixir of tax rules that will generate 4% growth. You don’t need to see anything more than the one-page outline put out by the current administration to get to this conclusion. Filling in the details will not change the fact that their plan, if passed, will have no appreciable effect on economic growth in the next few years.