You may or may not realize that the global headquarters of Growthecon.com is in Houston. So it’s been an interesting few days, to say the least. This post has nothing to do with economics. It’s just things that keep running through my head as we clean up.

I live a charmed life, for so many reasons. But most recently, it’s the fact that we made it out of the storm with a dry house (barely) and with everyone safe. Lots of our neighbors are not so lucky, so we’ve been doing what we can to help. It doesn’t feel like much. I hope it makes a difference.

Some of this post is me documenting things I don’t want to forget, which includes a lot of raw emotions in response to some amazing events. So farther down you are going to find me taking some shots that maybe one day I’ll regret. Maybe. But right now I don’t think so.

Saturday night, the 26th, is when the rain started hard in the Houston area. We didn’t sleep. We just watched the rain come down, and ran outside during breaks to clear debris away from the storm drain in front of our house.

The Houston Flood Control district has an online system recording rain totals around the bayous in the city. If you watched the news, you know the bayous are a series of artificially widened creeks that drain the city into the Gulf. Here’s the time series of rainfall totals from the Braes Bayou near Stella Link road, the closest gauge to our house.

We already had 1.32 inches during the morning of the 26th, and then before midnight we added another 3.56 inches. For some sense of scale, 4.88 inches is right around the typical monthly total for August in Houston. And that was before the heavy stuff came. Between midnight and noon on Sunday, the 27th, we took 9.92 inches, most of that between midnight and 3am. I cannot describe for you how fast and how hard the rain came down in the first few hours of Sunday. And our area wasn’t the worst.

There was a break Sunday morning, and this was the view out of our front door. That front areas of bricks was under an inch of water that you can’t quite make out in the picture. Under the street light, on the left, is the storm drain. When I waded out there to check it for blockages, the water was at my waist. Across the street from the light is supposed to be a fire hydrant. It was under water.

That water rose not just because it rained hard, but because the bayou overflowed, and there was no place for it to go. The flood district also provides plots of the level of each bayou at certain stations, and here’s the time series of Braes Bayou. You can see the essentially vertical rise right around midnight of the 26th, into the 27th. At that point the rains continued, and the bayou, thanks to our rain, rain upstream flowing down, and rain downstream backing it up, stayed above flood level into Monday the 28th. 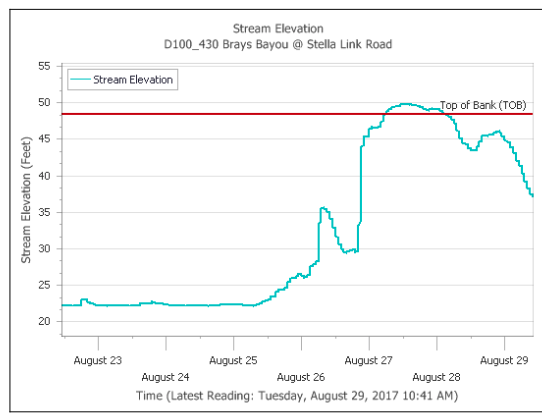 If you flip back to the rain chart, you’ll see that we still got 3.2, 2.28, and 6.24 inches of rain in the 36 hours after the heavy stuff. Believe it or not, this is where we got lucky. That let-up of 3.2 and 2.28 inches allowed the bayou to recede, just a little. It bought us a few inches to spare, so when the 6.24 came, our house was able to survive. When I wandered downstairs at about 1:30am on Monday morning, the water had at retreated about one foot from our house, and it wouldn’t come closer.

At its height, we came within 1-3 inches of flooding, depending where exactly around the house you looked. Over the rest of the morning of the 28th, Monday, the water retreated further, and we (personally) were out of trouble. Some tense moments occurred on Tuesday as we took more rain, but never enough to flood the bayou near us again.

Like I said, this is a story of amazing luck. Through all that, we didn’t flood. We didn’t even lose power throughout the storm. We didn’t do anything special, it just turns out that our house is one or two inches higher than a few others on our street. People just a few doors down our street are now ripping out carpet and drywall. I don’t know the exact number of people we know who flooded, but it’s more than I can count up quickly in my head. We’ve tried to help people out, but it feels like very little.

Just about a week ago, I was still reading stories about alt-right neo-Nazi shitheads with brittle egos and tiki torches. And right as Harvey was hitting land the first time, known terrorist Joe Arpaio was getting pardoned for taking a dump on the Constitution. But for each and every one of those people, I saw over the last week hundreds and thousands of decent human beings put everything they had on the line to help perfect strangers. Hundreds and thousands. Remember that when the news gets back to publicizing the worst among us.

Here’s a few of the best:

And I haven’t mentioned all the people that are out right now volunteering their time to clean out their neighbor’s houses, or cook them food, or help evacuees fill out FEMA forms, or … everything else they are doing.

For every editor of every newpaper, magazine, and website out there, here’s the deal. Go out and find every single one of these magnificent people. Go find them and tell their story. Until you do that, I don’t want to see or hear another piece that involves the term “real America”, or how some unnamed official is “distressed” at something happening in the White House, or provides a profile of some shitbag neo-Nazi with a self-esteem issue. And until you find all these people, I don’t want to read any Vox or Atlantic columns on “What Harvey says about …”. It’s a catastrophe, not a fucking metaphor.

For those of you wondering why the whole city didn’t evacuate, do you really think that the city was shocked to discover it could be hit by a massive hurricane? Sheltering in place was not some shoot-from-the-hip wild guess of a strategy. It’s the best of bunch of crappy options. If you want to have a discussion, say a month from now after the worst of this is all over, about whether there are ways to effect an evacuation during the next Harvey-like event, great. Let’s do it. In the meantime, your homework is to devise a plan to evacuate the entire state of Massachusetts subject to the following constraints. (A) you have 48 hours, (B) you can’t use Rhode Island, Connecticut, or New York, and (C) everyone needs shelter for up to 10 days. Go.

If you read this far, thanks. It was a self-indulgent brain dump from someone with exactly zero problems right now. I should be outside finding a better way to help than generating a blog post. If you have a mind to help, one charity that my wife has been involved with, and does a great job locally, is the Houston Food Bank. Go there, give them money. Let them feed people.