Having just posted something on de-skilling in the Industrial Revolution, I saw this post by Nick Bunker regarding the skills gap (or perceived skills gap) as an explanation for the current low employment rate in the U.S. currently. He links to a paper from last year by Paul Beaudry, David Green, and Benjamin Sand on the reversal in the demand for skills since 2000. 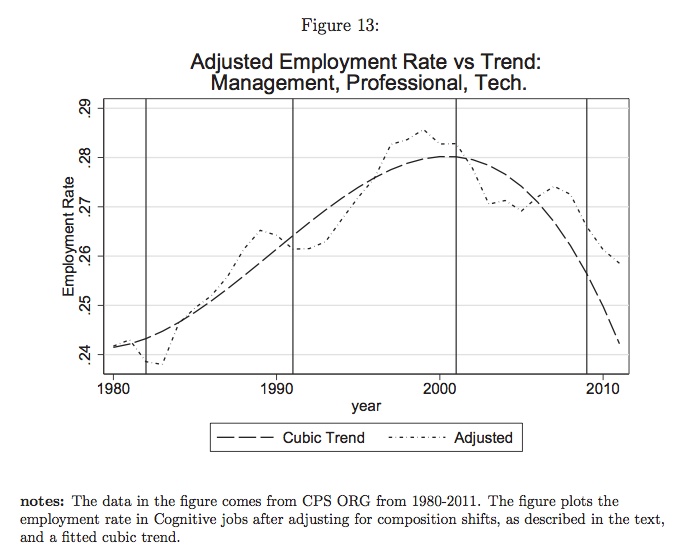 The Beaudry, Green, Sand (BGS) paper has the same kind of stylized fact, only over a much shorter time frame, as the paper on the Industrial Revolution by de Pleijt and Weisdorf I posted about. Basically, the level of skilled worker employment is falling. For BGS, this begins around the year 2000, and you can see the essential point they are making in their figure 13. Here you see that the employment share for "high-skilled" workers (managers, technical workers, professionals) peaked right around 2000, and since then has been falling. The drop since 2008 really seems to just be continuing the pre-2008 trend rather than a response to the financial crisis. In contrast, the trend for low-skilled service and labor employees is strongly positive (their figure 15), and despite the dip in 2008, this doesn't seem to have reversed the general upward trend of the last few decades. So we appear to have a "de-skilling" going on in the U.S. since 2000. 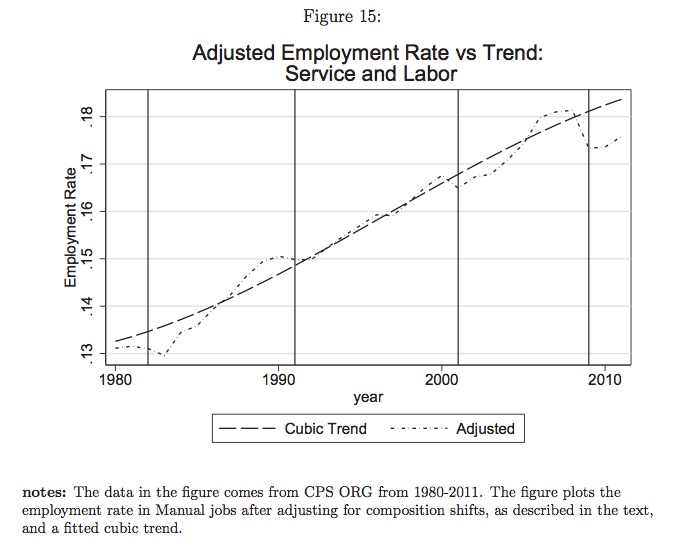 BGS propose a theory for why this might be the case. In their model, the IT wave of the 1990's required high-skilled workers to get the IT capital installed - put in the servers, write the underlying code, adapt existing business practices to new IT, put things on websites, etc. etc.. [Quick aside: Before I got my Ph.D. and inhabited this dark corner of the internet, I was one of those IT workers. One of my clients was United Airlines, and I worked on incorporating e-tickets into their back-office accounting system. It was as boring as it sounds, and hence here I am.]

Now that this IT capital is installed, we don't need nearly as many high-skilled workers, as we're down to maintenance work. [Example: the team of people I worked with at United are now all doing other things because you only need to program the accounting system for e-tickets once.] So according to BGS we now have an "overhang" of skilled workers with college degrees who aren't really needed. They are pushing down the job food chain into jobs that would normally have gone to medium-skilled non-college-educated workers, which in turn forces those people down into low-skilled service or labor jobs. People with very low skills/education are pushed out of the labor force entirely or forced to work for less because there is an abundance of that kind of labor.

This has to be bad, right? It is, certainly, for everyone who has been caught out with "too many" skills for their jobs. Lots of people were investing in college educations in order to be those high-skilled technicians and managers, and now they can't find those kind of jobs. They have to take less skill-intense positions, for which there is more competition, and hence they probably won't be earning as much relative to the loans they took out to go to college. The people at the very bottom end of the job food chain are really out of luck because they are being replaced entirely.

But. But as we go forward, new workers who get added to the workforce can do so without acquiring as many costly skills. In short, they could get away with skipping college, or do it at a cheaper place, or get a 2-year rather than a 4-year degree. If the de-skilling trend continues (robots!), then it isn't necessarily true that *new* workers are necessarily worse off. They may face a market that demands more low-skilled than high-skilled workers, but they would also need to invest far less in order to be hired. Imagine not needing to go into $40,000 in student debt just to get a job. They may well be better off without the debt and with the lower-skill job. [Before someone gets all huffy in the comments, yes, I'm include my over-educated academic self in that bucket. If I was just 10 years old now, maybe I would end up with less formal education, a lower skill job, and do economic growth as a hobby. Who knows?] There are two responses to technical change. Raise output, or lower inputs. Since 2000 we've apparently been choosing the latter strategy, and that might be how we continue.

So, whether de-skilling is bad depends on perspective. From the perspective of existing workers with skill, yes it is bad. From the perspective of new workers who are making their choices about skill, no it is not. Which makes it no different from any other technology change. Was it obvious that the invention of the automobile was bad? From the perspective of trained farriers, yes. From the perspective of young people who could choose to become a machinist rather than a farrier, no. The change to autos presumably was skill-demanding (although, I don't know, I never shoed a horse before), but that doesn't change the fact that some people lose and some people win. We've lived through thirty years of increased demand for college educated people, with an attendant increase in their wages relative to the less educated. Is it necessarily bad that this trend reverses?

What about those people at the very bottom of the skill distribution? They're getting shafted by this de-skilling. Yes. But they were getting shafted before 2000 by the skill-biased technical change favoring college-educated workers. De-skilling suggests that maybe how we help those at the bottom of the distribution should change. Maybe de-skilling means we need to rethink whether college prep as the point of education. Maybe the point should be on building marketable skills, not building college-applications? Nowhere is it written that technological change and economic growth must always and forever increase the demand for college-educated employees, so it may be time to adapt.