William Gale and Andy Samwick have a new Brookings paper out on the relationship of tax rates and economic growth in the U.S. [Apologies to whichever blog/site led me to the paper, I can't remember.] Short answer, there is no relationship. They do not identify any change in the trend growth rate of real GDP per capita with changes in marginal income tax rates, capital gains tax rates, or any changes in federal tax rules. 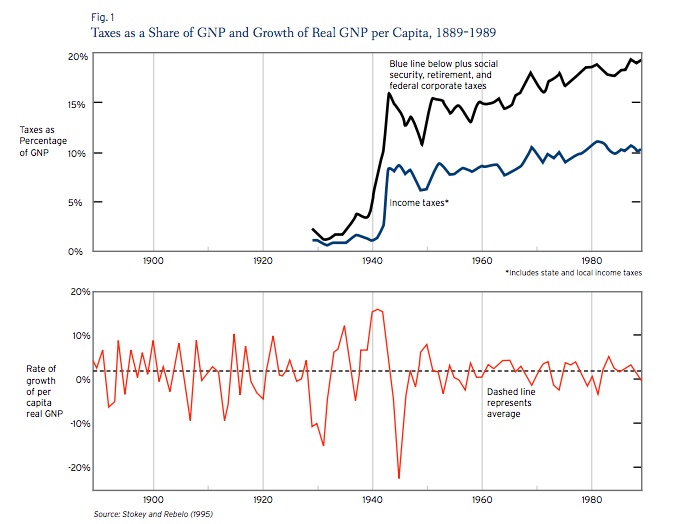 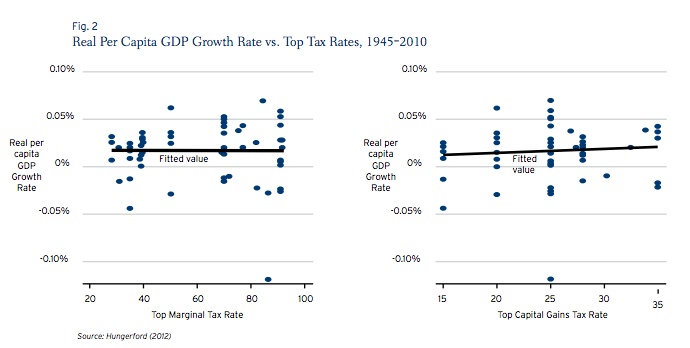 The next piece of evidence is from a paper by Hungerford (2012), who basically looks only at the post-war period, and looks at whether the fluctuations in top marginal tax rates (on either income or capital gains) are related to growth rates. You can see in the figure that they are not. If anything, higher capital gains rates are associated with faster growth.

The upshot is that there is no evidence that you can change the growth rate of the economy - up or down - by changing tax rates - up or down. Their conclusion is more coherent than anything I could gin up, so here goes:

The argument that income tax cuts raise growth is repeated so often that it is sometimes taken as gospel. However, theory, evidence, and simulation studies tell a different and more complicated story. Tax cuts offer the potential to raise economic growth by improving incentives to work, save, and invest. But they also create income effects that reduce the need to engage in productive economic activity, and they may subsidize old capital, which provides windfall gains to asset holders that undermine incentives for new activity.

The effects of tax cuts on growth are completely uncertain.