Robert Gordon released a paper recently where he presents his estimates of potential GDP for the U.S. going forward. I had planned on writing a longer post discussing about why you should take his projections seriously, and maybe some speculation about what would have to happen to reverse his conclusions. Seriously, I had a few paragraphs written, a couple figures cut out and ready to go, and then Jim Hamilton put up precisely the post I wanted to write. So the first thing you should do is go read Jim's post.

...and if you are still here, let me provide an uber-quick summary of my own before I talk about how you could convince yourself that Gordon is overly-pessimistic (he's probably not, but if you want to rock yourself to sleep at night, this might help). 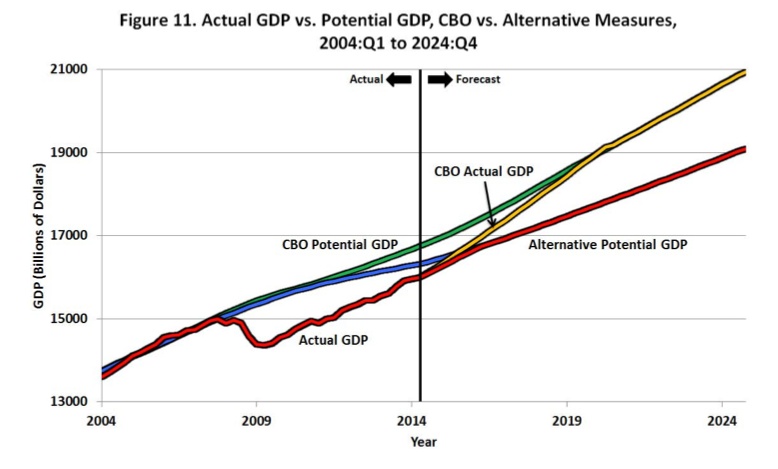 So, what does Gordon find? Basically, GDP growth is equal to growth in GDP per hour worked (productivity) times growth in hours worked. Hours worked are unlikely to grow much, given that unemployment has already fallen back to 6%, that average hours per worker have recovered much of their decline, and that the labor force participation rate is unlikely to recover much of its recent decline. So the only way for GDP to grow fast enough to hit our prior level of potential GDP (which is essentially what the CBO projects it will do) is for productivity (GDP per hour) to grow much faster than it has at any time in the last decade.

You can see his implications in the above figure. The red line is Gordon's projection for potential GDP based on his assumed lower productivity growth rate, which is closer to recent averages. The CBO potential GDP path is driven by what Gordon says are aggressive assumptions about how fast productivity will grow.

In short, we aren't going to recover back to the pre-Great Recession trend line for potential GDP any time soon. One might quibble a little about Gordon's assumptions, and perhaps we won't diverge from the prior trend line (the yellow one) as much as he suggests. But it's really hard to come up with reasonable evidence that the CBO is making the right assumption regarding productivity growth.

Now, if I want to go to bed at night believing that we might be able to get back on that prior trend line, what should I tell myself? I'm not going to tell myself that we'll be magically saved by some kind of technology boom. It could happen, I guess, but that's not something I could rely on, or having any way of reliably predicting.

A few points on this. Why would firms gain (or why did they lose) pricing power? My guess is that it depends on the willingness of consumers to "shop around", which in turn is based on economic conditions. When things get bad in 2008, people become more sensitive to price changes, and so firms lose pricing power, and hence revenue productivity falls. If consumers were to recover in the sense of becoming less sensitive to price changes, then firms could gain pricing power and that would raise measured productivity. Will that happen? My guess is yes, it will, I just don't know when. Will that boost to revenue productivity be sufficient to put potential GDP back on the pre-Great Recession path? I don't know.

The last thing to point out is that revenue productivity is exactly what we want to measure in Gordon's case, where he ultimately is worried about Debt/GDP ratios. Because the debt is denominated in dollars, what I care about is the economy's ability to generate dollars, not widgets. There's an entirely different post to be written about why the Debt/GDP ratio is a stupid way to measure the debt burden, but I'll leave that alone for now.

In short, if you want to be optimistic about bouncing back to the pre-Great Recession trend for potential GDP, then part of that optimism is that firms regain lost pricing power, and thus experience a boost to their revenue productivity. This can occur in the absence of any change in the underlying pace of real technological change, and isn't tied to our expectations about the usefulness or arrival of new technologies.