Very recently John Fernald of the SF Fed released a quarterly series on total factor productivity (TFP) in the US. One of the neat things about his series is that you can look separately at investment (equipment and consumer durables) and consumption (everything else). When you plot these out, you see a really big divergence. 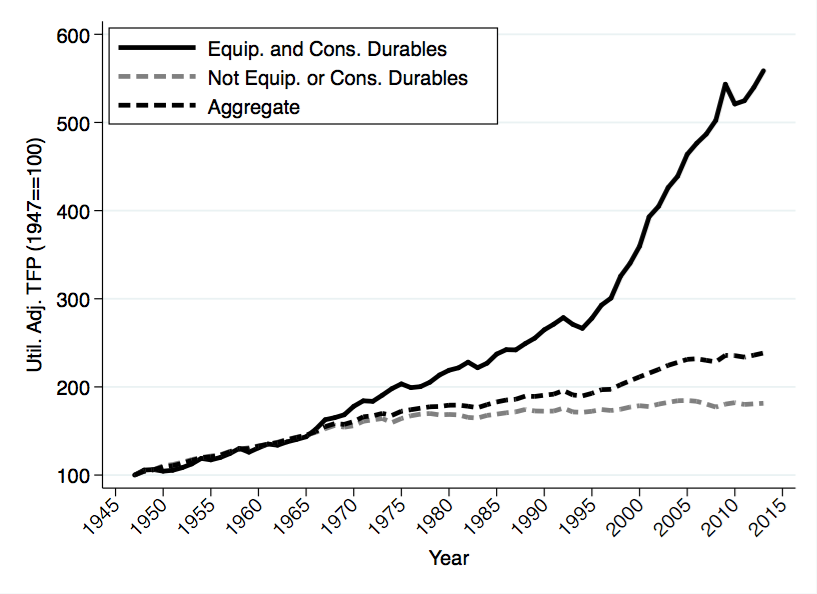 (Note: My graph from Fernald's data).

Consumption TFP essentially flat-lines from about 1980 until today. At the same time, investment TFP races ahead. Aggregate TFP is a weighted average of the two, and since investment is only about 20% of total spending, this means aggregate TFP exhibits a slight rise (Each series is normalized to 100 in 1947, so you cannot compare absolute levels across sectors like this).

The flat-line in consumption TFP has generated a few puzzled reactions. David Beckworth in particular said that the consumption series "does not pass the smell test". He says that Fernald's measure (and by implication other TFP calculations) must be flawed, and wants a better way to measure productivity.

This is an overreaction, and represents a misunderstanding of what TFP is, and what it measures. The first thing that often happens is that people confuse "labor productivity" with "TFP". Labor productivity depends on TFP and on other factors of production, like capital. So labor productivity could be rising in the consumption sector even if TFP is not.

But leaving that possible misunderstanding aside, let's think more carefully about what goes into TFP. As a rough guide, when we measure changes in TFP what we get is the following

You can be more technical about things, but this is roughly what you'll get. What are those three parts?

The problem that plagues Beckworth and many others is that they are trying to exactly equate TFP with "technology". That just isn't the case. Technology can be improving in the consumption goods sector, but this could be offset by changes in utilization, markups, or input use. Flat-lining TFP doesn't imply that there were no gains in technology.

An additional factor that would play into consumption TFP staying flat would be market power, and here I think Beckworth gets it right that whatever is going on in consumption is because of services. The service sector tends to have really low markups over marginal cost. Additionally - and I have nothing but some intuition to back this up - I think innovation in the service sector may typically take the form of lowering markups. Think Wal-Mart. It sells the same crap you can find in 100 other stores. It's entire business model is selling it for less than everyone else. With low and falling markups, the contribution of additional inputs like capital (e.g. various IT investments) and labor would not have added to TFP growth.

On top of all that, the idea that consumption technology has not grown much over time isn't that hard to believe. Consider this example. We just were forced to buy a new fridge because the old one konked out (long, very annoying story). The fridge is produced by the consumer durables sector. Our fridge is more efficient, quieter, colder, etc. etc. than a fridge from 10 years ago. There have been clear technological advances in fridge-making that I benefit from. If I wanted a fridge equivalent to what we had 10 years ago, I could get that for probably 1/4 of the price of the new fridge. So there is obvious technological change going on in the investment sector, and obvious TFP gains.

But I bought the fridge through Best Buy (as it turns out, another long, annoying story). Best Buy's value-added, such as it was, is part of "consumption" because it is a service. And is Best Buy any better at selling fridges or screwing up delivery dates than they were ten years ago? Maybe, maybe not. If you told me that a major appliance retailer in 1990 was about as efficient at selling and delivering fridges as one today, I'd believe you. What is the major technological breakthrough in the service industry that I should think of from the last few decades? Those little headsets that people at the Gap wear?

Does that mean I shouldn't care about slow growth in consumption TFP? No. We'd prefer to have faster TFP growth than slower TFP growth. But you shouldn't dismiss TFP because it doesn't match up to the notion in your head. If TFP doesn't pass the "smell test", it may be that you're sniffing the wrong thing.