Warning: this post is too long and wildly speculative.

Culture has (re)-emerged as one of the proposed "deep determinants" of economic development. A good place to get a feel for this literature is a piece in J. of Economic Perspectives by Guiso, Sapienza, and Zingales (GSZ). They define culture as "those customary beliefs and values that ethnic, religious, and social groups transmit fairly unchanged from generation to generation." Keep in mind, this is what GSZ a narrow definition of culture. Culture is like institutions; we seem to know it when we see it, but can't define it.

Regardless, one of the stronger results that pops up in the culture literature that GSZ review (and often authored in the first place) is the relationship of "trust" and economic success. Population groups that tend to trust others also tend to be economically successful.

This one figure from GSZ is particularly striking. Using data from the U.S. and self-reported ethnic backgrounds, they plot "trust" for each group relative to people who report as being descended from British ancestors. Trust is measured by asking individuals if "most people can be trusted (yes/no)". The way to interpret the figure is that the percentage of Japanese-descended answering "yes" is 24.7 percentage points higher than whatever the British-descended answered. 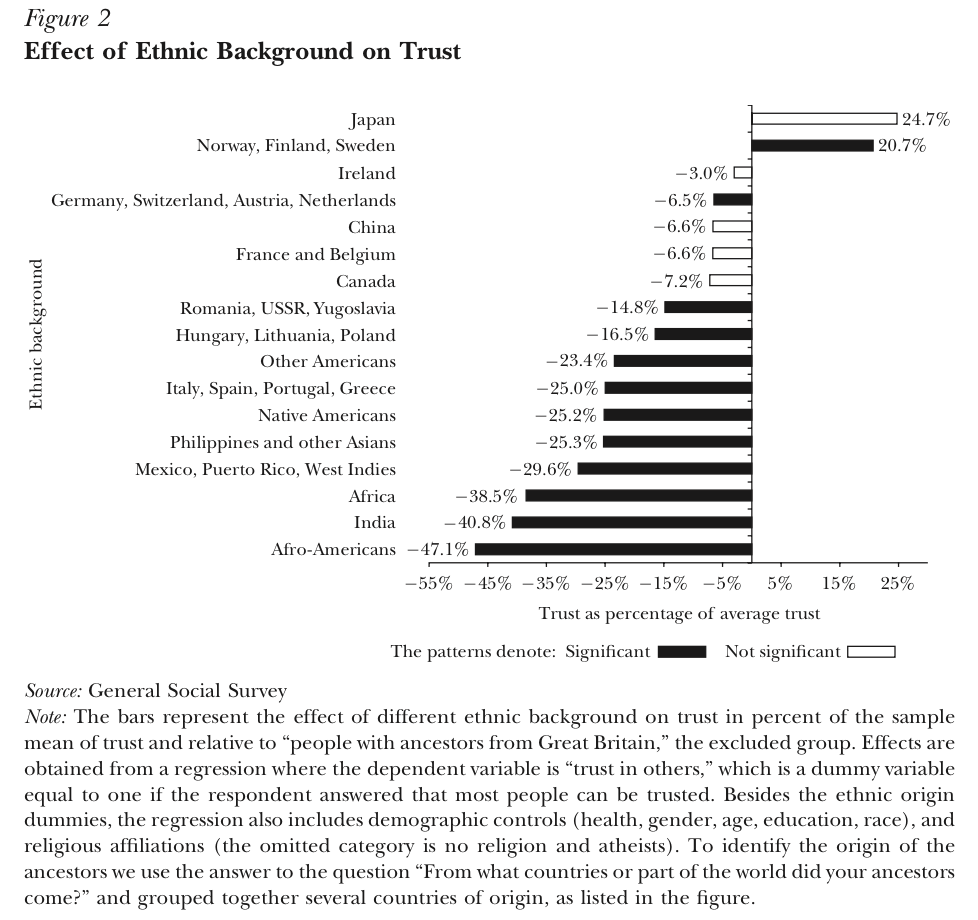 What do we see? The Japanese and Scandanavians are must more trusting than the British, while other Western Europeans are just about as trusting as the British. Southern Europeans are less trusting, and as we get to African and Indian-descended Americans, trust falls off a cliff. Patterns like this show up if you alternatively look at the World Values Survey at individual countries. In general Western Europeans (and their descendants in places like the US and Australia) report a higher degree of trust than other regions of the world. They also tend to have much more economic success wherever they live - see my recent post on population groups and development.

Now, there is no way for me to tell you that this is causal. It could well be that a lack of economic success leaves you less likely to trust others. But pending a definitive study on this, let me leap ahead on the assumption that there is a strong relationship of trust to economic success.

Why? The basic model here would be that economic exchange is a repeated game you play with strangers. In each round, you can either cooperate or cheat (you can pay your bar tab or you can slink out the back). Everyone is better off if you and all the strangers you interact with continually play "cooperate". But at any given moment, you could take a stranger for a sucker by playing "cheat". Once someone plays "cheat", though, everyone plays "cheat" and we are all worse off. A culture of trust - and in particular trust in non-kin strangers - means that people take "cooperate" as their default option. We grab all the win-win exchanges possible.

Trust in non-kin strangers is such a powerful force for economic success because it scales so well. There are a nearly limitless number of strangers to make win-win trades with. If you restrict yourself to only your kin-group, the number of trades is severely limited. How do you build up complex networks of exchange and division of labor with, at best, a few hundred people you trust? Trust opens up economic possibilities.

So where did Western Europeans get this culture of trust, and in particular trusting non-kin? (If you already thought this post was highly speculative, then buckle up). Let me propose that the origins of this may be located in the re-organization of northwestern European society that occurred around 800-1100 AD. There was a fundamental shift away from kin-groups as the organizing principle for families towards households in this period. The alternative that arose was a "household" that centered around a smaller core of kin (the nuclear family) but also included non-kin members. This meant that NW European households were constantly exposed to, and interacting with, non-kin "strangers". The NW European "culture of trust" was built on that foundation.

There are two books that I'll suggest you read on this if you want to get some real depth on this idea. Whatever I say after this is culled in large part from these works.

The fundamental form of the European family is not the lineage group but the household. Its members do not necessarily have to be related through descent or marriage. This makes the system very flexible and adaptable to other situations.

He also makes the case that this was a particularly important social change (p. 93):

The loosening of lineage ties created some leeway for striking up new social relationships beyond the family circle. Ties to people other than one's kin played an important part in European social history and made a major contribution to Europe's social dynamics.

Moore finds this same process going on in the upper reaches of society (p. 70):

Upon his accession the eldest son became head of what was now conceived as a dynastic family, capable of being depicted by the diagram or `tree' in which the European aristocracy has invested its identity ever since. The dynastic family...gradually superseded the more loosely articulated kinship group in much of northwestern Europe for the purpose of controlling and transmitting landed property.

We've got a process going on by which the wider kin-group is being put aside in favor of nuclear families, and these nuclear families are incorporating non-kin strangers into their households.

Why was this happening? Let's start with the peasants. The non-kin strangers tended to be young adults. They were farm hands (both male and female), apprentices, or servants in the manor house, and they left these positions once they married. "Working as a life-cycle servant...seems to have been the defining experience of European youth" (Mitterauer, p. 94). This was not just a case of young adults working as servants for a lord. Farm hands were prevalent on most of the smaller hides (farms) that made up a lords estate.

The origin of this structure for households is located by Mitterauer in the particular agricultural system that developed as NW Europe went from being a frontier to being settled. This "cerealization" of NW European agriculture was most productive in the hide system. Simply put, there is an efficient scale to operate at if you are growing rye and oats ("Rye and Oats" is the title of Mitterauer's first chapter). That scale is fit best by a nuclear family accentuated by some farm hands. Most importantly, you want to keep the scale of the hide constant, so you cannot have families splitting them up across children. But you need something for all those children to do, so the lords shuffled them around as farm hands and apprentices and servants between households. This is an atrocious over-simplification of Mitterauer's argument, but I think it gets the main points right. The non-kin-based families of NW Europe arose because of a peculiar agrarian system in that area. The lingering effect of these families was to build up trust in non-kin strangers.

At the top end, a similar change was taking place. Moore does not place as much weight on the nuances of agricultural production as he does on the closing up of the frontier. He paraphrases George Duby (p. 63, no cite given, but I think he means this book):

..described the social history of this period as one of disorder in transition between two ages of order, that of the Carolingian world where a large but loosely defined and structured nobility supported itself with a haphazard combination of plunder and booty....and that of the precisely articulated society of orders, sustained by legal and social domination...which..remained familiar in western Europe until the age of revolution.

Once you could not keep you wider kin-group happy by plundering some new corner of France, you had to get serious about dividing up what you did have.

As Moore notes (p. 66), the crisis arising from having multiple kin-group claims to inheritance was not unique to NW Europe. It happens everywhere. It was not this problem that made Europe unique, it was the solution. Europe honed in on strict dynastic succession, eliminating disputes over inheritance by telling everyone in the extended kin-group (uncles and male cousins in particular) to go f*** off. Moore does a nice job of explaining how this was accomplished with the collusion of the Church. This post is already too long, so I'll push you off to his book for the details.

The end result was that at the top level of society, the households of kings, dukes, and such were no longer kin-based. Sure, they were gigantic. But they were filled with non-kin "strangers". Pages and servants and advisors and priests who were not related by blood or marriage, but owed their allegiance to the lord nonetheless.

So at both top and bottom levels of society in NW Europe in the years between 800-1100 we have all of these people learning to trust non-kin strangers. Perhaps unwillingly at first, but the mere exposure to non-kin strangers in economic relationships would have to build up some trust over time. Once that trust is built into these households, it gets passed on. It becomes "culture" as GSZ would describe it. But that culture of trust allowed the populations of NW Europe to take advantage of more win-win exchanges between strangers, and contributed to their on-going economic advantage.