The CBO just released a new projection of both GDP and the budget out to 2024. In short, the CBO sees the U.S. staying below potential GDP for several years. Menzie Chinn just did a short review of how people use inflation and/or unemployment to try and figure out the difference difference between actual and potential GDP.

From a growth perspective, I wanted to take a look at the projections a little differently. First, I don't much care about the level of aggregate GDP, I care about the level of GDP per capita. So I took the CBO numbers and combined them with population figures and projections to get actual and projected GDP per capita for the U.S. Note, I'm using the CBO projections for actual GDP, not their potential GDP numbers. I want to look at the expected GDP numbers.

I took the trend in GDP per capita from 1990 to 2007, and extrapolated that out from 2008 to 2024. Then I plotted the actual and CBO-projected GDP per capita data against that trend. Here is what you get: 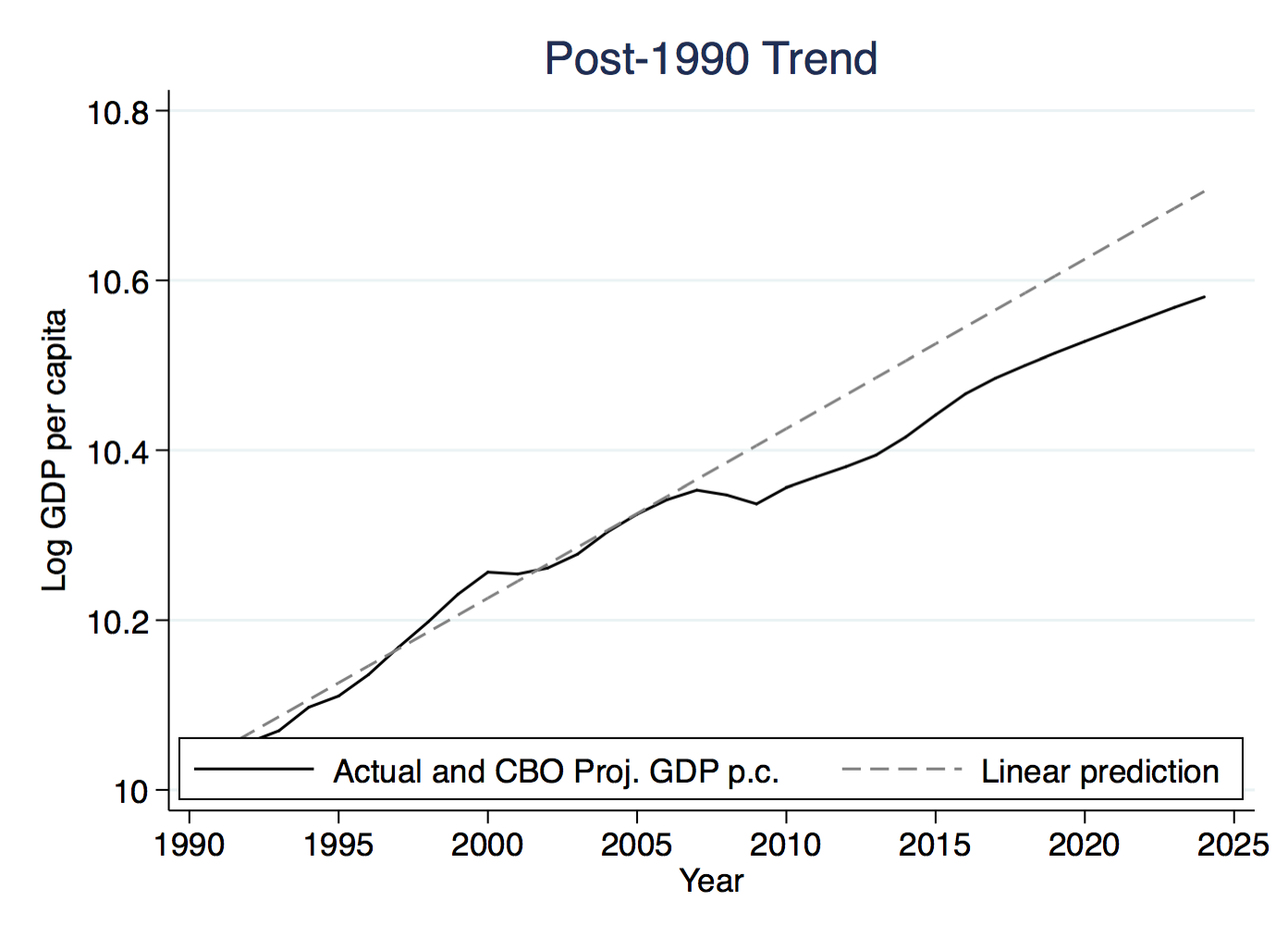 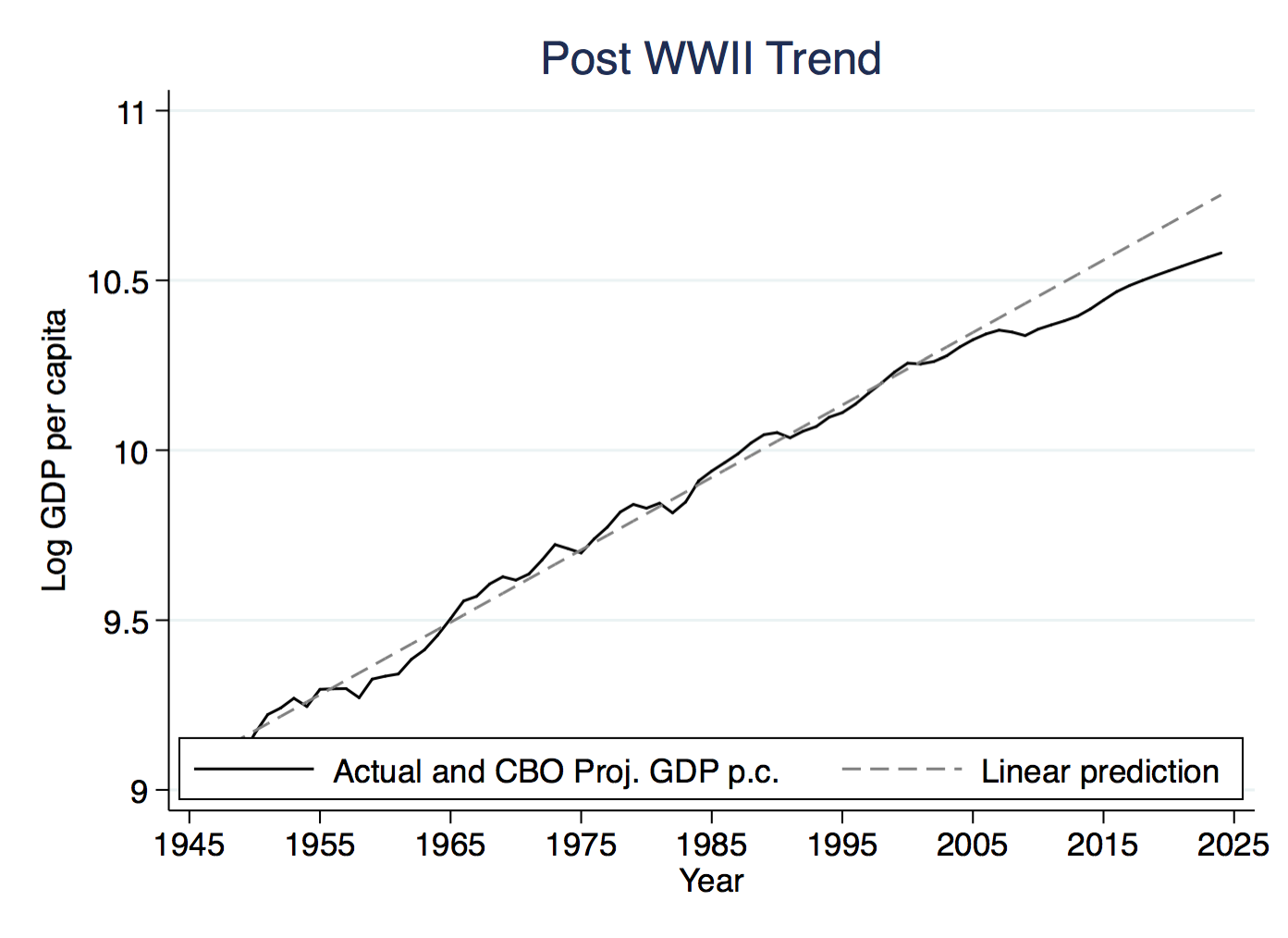 But if you extend your view back even further, and incorporate the whole period of 1870-2007 to form the trend line, things look different. Now, if you plot the projected GDP per capita against the trend, it looks as if the U.S. is spot on. 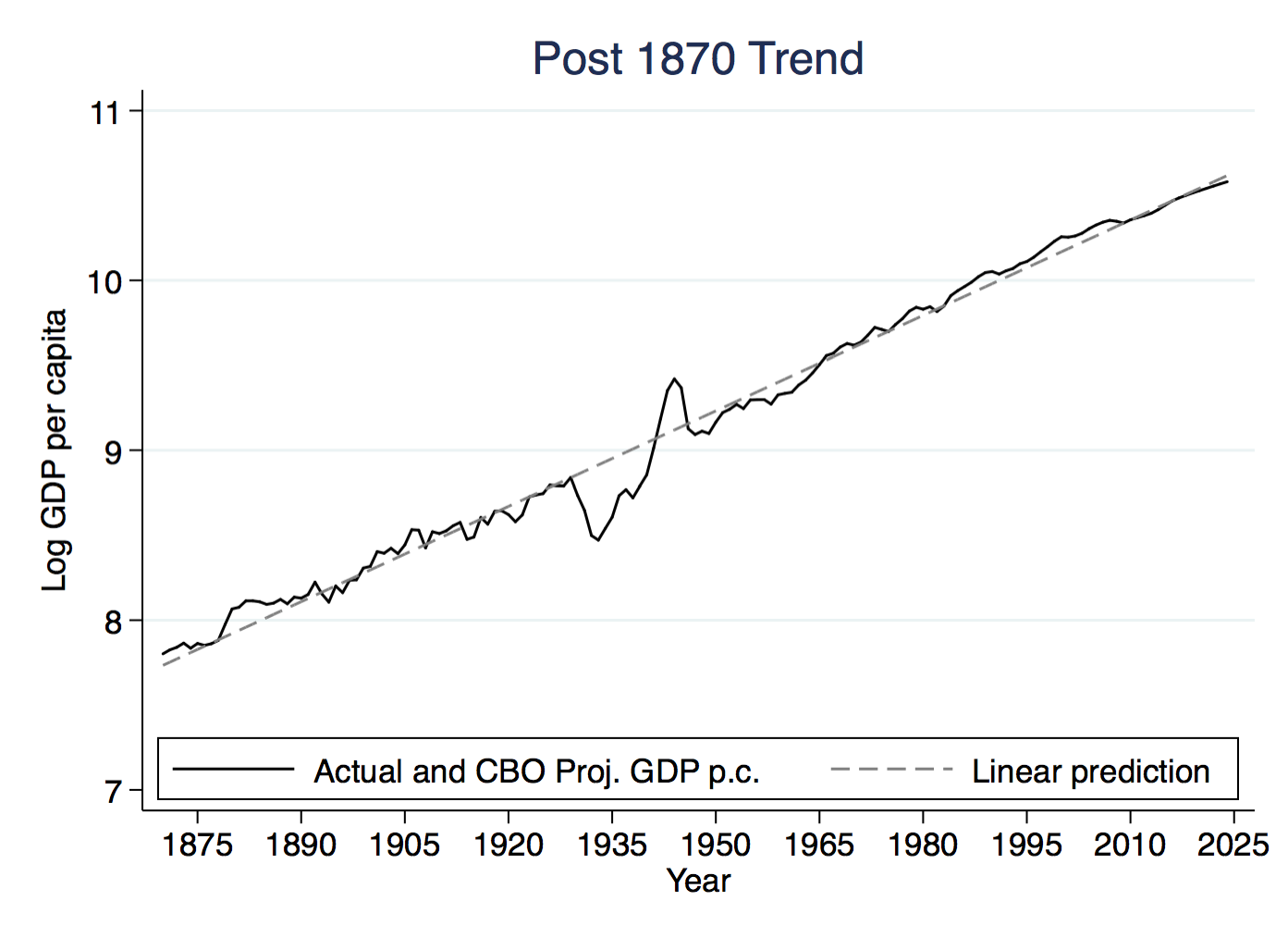 GDP per capita is almost exactly where you'd expect it given the historical trend. The CBO expects GDP per capita to be a little low in 2024, about 2% behind the full trend line. Using the 1870-2007 trend, there doesn't appear to be anything particularly unusual about the projected path of GDP per capita. The U.S. seems to be moving along the same balanced growth path it always has.

What really looks like the anomaly in U.S. data is the extended period from about 1990 to 2010 that we spent above trend. You could think of this as capturing John Fernald's argument (or see here) that the IT boom of the 1990's was a one-time level shift up in GDP. We got a big boost from that, but now the economy is settling back to the long-run growth path.

[You should not - NOT - use this as an argument that the financial crash and subsequent recession were necessary, useful, or welfare-improving. It is quite possible for the economy to have managed a graceful slide back to the long-run trend line after 2007 rather than experiencing it all in one dramatic plunge. The long-run trend is like gravity. Yes, it will win in the end, but that does not mean that I have to leap to the ground after cleaning out my gutters. I have a ladder.]

I really thought when I started playing with this data that I'd be writing a post about how the Great Recession had fundamentally shifted GDP per capita below the long-run trend, and that this represented a really fundamental shock given how stable the long-run trend had been until now. But the current path of GDP per capita doesn't appear to be that surprising in historical perspective.

The big caveat here is that the CBO could be entirely wrong about future GDP per capita growth. If they have been overly optimistic, then we could certainly find ourselves falling below even the very long-run trend. Then again, they could have been pessimistic, and we might find ourselves above trend for all I know. But even with all the uncertainty, the expectation is that the U.S. economy will find itself right where you would have predicted it would be.