Last weekend there was a conference at Brown University on long-run determinants of growth (see program here). I unfortunately did not get to attend this year, so I am vicariously attending by reading some of the papers.

One that particularly caught my eye is by Roy Elis and Stephen Haber, on "Climate, Geography, and the Evolution of Economic and Political Institutions". As you can probably tell from the title, this is not a paper shy about swinging for the fences.

Let's get one point out of the way first. Yes, of course agricultural conditions matter for institutions. All sorts of household and village institutions are going to be built around agricultural conditions. Share-cropping norms, tenancy concepts, risk-sharing arrangements etc.. are all going to be keyed in to the specifics of agricultural production in different areas. Elis and Haber are, like I said, swinging for the fences. They are talking about broader institutions like the degree of democracy and the overall level of property rights protection. "Institutions" in the big-think historical literature sense.

They do a great job of explaining their ideas in manageable language, so your best bet is to read the paper yourself. But I can give some flavor of what they propose. Their idea is that economic and political institutions depend, to some extent, on the natural level of transactions that are supported by the hinterland surrounding the core area of different economies. Think of the Nile valley, or the Yangtze, or the Paris basin.

The level of transactions increases as the cost of transportation falls, as the hinterland is effectively larger. So places that have relatively flat terrains and lots of waterways will have larger hinterlands. They have a great map showing the difference between New York and Mexico City on this. 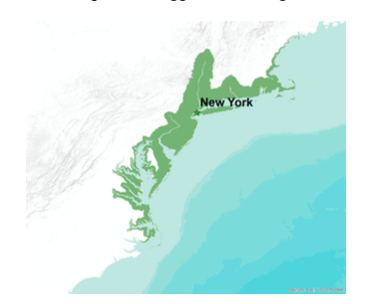 Elis and Haber worked out how far you could get from each city using 40 megajoules of energy. This is the amount of energy that it would take to transport a metric ton of goods 50 miles on flat land using a wagon. The exact number 40 isn't terribly important here. What matters is that they are using a fixed energy budget and then looking out from each city for the distance that energy budget gets you.

As you can see, the hinterlands of New York are much wider than Mexico City (yes, the maps are on the same scale). Effectively, New York could draw on an area from Boston to DC, while in Mexico City the area available for growing crops that could be transported into the city is much narrower. So New York naturally had more transactions available or possible, in that sense. A larger agricultural area was capable of transacting with New York.

The second aspect of the level of transactions is the degree to which shocks are correlated spatially within that hinterland. If when things go bad, *everyone* has it bad, then there is little scope for transacting. Think of Egypt's Nile Valley. If the monsoons failed in central Africa then there was no flood and no one had any crops to trade. In contrast, places with rain-fed agriculture were more likely to have uncorrelated shocks (it rained on my farm, but not on yours) and so more transactions were possible.

The last aspect of transactions is the ability to store crops. The more storage, the more transacting could take place. And perhaps more importantly, transacting over *time* could take place. In tropical places where crops rot quickly (i.e. in days) then you don't have the opportunity to engage in long-term contracts.

What Elis and Haber propose is that places with more "natural transactions" were more likely to develop democratic or representative institutions, and more likely to develop economic institutions that support growth. Lots of natural transactions lead to "Transactional States" that support specialization, property rights, democracy etc.. etc.. Why? Well, that is kind of left in a black box. They don't explain exactly why anyone in charge in these areas wouldn't just level confiscatory taxes on all those transactions, or why they wouldn't take over the entire hinterland and internalize the transactions.

An alternative is "Insurance States" that have few natural transactions, because they have correlated shocks (i.e. the Nile) and few natural transactions. The state develops in order to smooth consumption, and that requires relatively heavy-handed taxation, autocracy to enforce that taxation, etc. etc.. Again, why it necessarily follows that this is *bad* for growth in the long-run is unclear. Why doesn't the need to coordinate insurance across time lead to a high-functioning state with the ability to support wider economic activity? It certainly seems possible that democratic society could choose to organize a deep welfare state. Denmark is still a country, right?

Leave their particular interpretation aside, and just look at the empirics. They use cross-country data, and regress the Polity score of a country (rescaled to 0 for autocracy and 100 for democracy) on several measures of "natural transactions". They find that having a hinterland (around the main city in a country) that is more productive in cereals is positively related to Polity scores today. That positive effect, though, disappears if the hinterland is in a tropical area where crop storage is not possible. They also find that hinterlands with more severe shocks (as coded by drought or overly wet conditions, and indicating highly correlated shocks within an area) have lower Polity scores.

If you look at GDP per capita and/or years of schooling regressed on the same variables, then you find that cereal production in the hinterland is highly correlated with both. While the point estimate suggests that this effect is smaller in tropical areas without storage, it is insignificant. The number of severe shocks also has no effect on GDP or schooling. So the most you can say about this result is that there is evidence that more productive hinterlands are associated with more economic development and education today.

I'm not sure that these second results should be taken as evidence that Elis and Haber's story about institutions is correct. My mental null hypothesis here is that higher agricultural productivity, because of low income elasticities for food, means more industrialization/urbanization/non-ag production. If non-ag production has some inherent advantage, or is subject to some positive agglomeration effects, then this means places with more non-ag workers will be richer. It doesn't necessarily have to be about institutions at all. It's just about climate and geographically determined productivity levels. Their results on GDP per capita and education seem entirely consistent with my null hypothesis.

The Polity result is more interesting, in that sense, because there is not obvious connection between agricultural productivity level and the type of government you end up with. The results seem to suggest that there is an association worth exploring. But what is the mechanism through which this works? Elis and Haber, as I mentioned above, don't give a model of *why* this connection should work this way. It need not be that these agricultural conditions had anything to do with institutions themselves. Perhaps higher ag. productivity led to more industrialization, which in turn leads to higher demand for better institutions.

It need not even be the case that there is any connection of geography/climate and institutions at all, even given their results. It certainly seems plausible that institutions could be spatially correlated, as people and ideas move slowly across space. So a few institutional lucky breaks (the Magna Carta?) that hit in places with certain geographic characteristics will spread most rapidly through other similar areas. And then we end up with good institutions in places that have hinterlands with uncorrelated shocks and high productivity, even though the geography and climate have absolutely nothing to do with institutions themselves.