This is a long post. It is partly in response to some questions from first-year grad students, and so it can be considered as notes for a lecture that might potentially be given to them at some point in the near future. For all that, it isn't pitched at a high mathematical level. I think you could understand this without having ever done any kind of dynamic optimization work before.

Do savings matter for growth? This is an ill-formed question for several reasons. First, implicitly hiding in that question is the assumption that savings = investment. That doesn't necessarily have to be true, and the events of the financial crisis in 2008 provide some evidence of this. So let us be more careful and say "Do investment rates matter for growth?".

Let's start with the simple cross-sectional relationship of investment rates and the level of GDP per capita. The following figure is from 2010, using Penn World Table 8.1 data. What you can see is that there is a (noisy) positive relationship between the two. Places with higher investment rates tend to be richer. If you used average investment rates over the last two decades or some other smoothing method, you'd get a similar picture. So we have some evidence that more investment is associated with a country being richer. 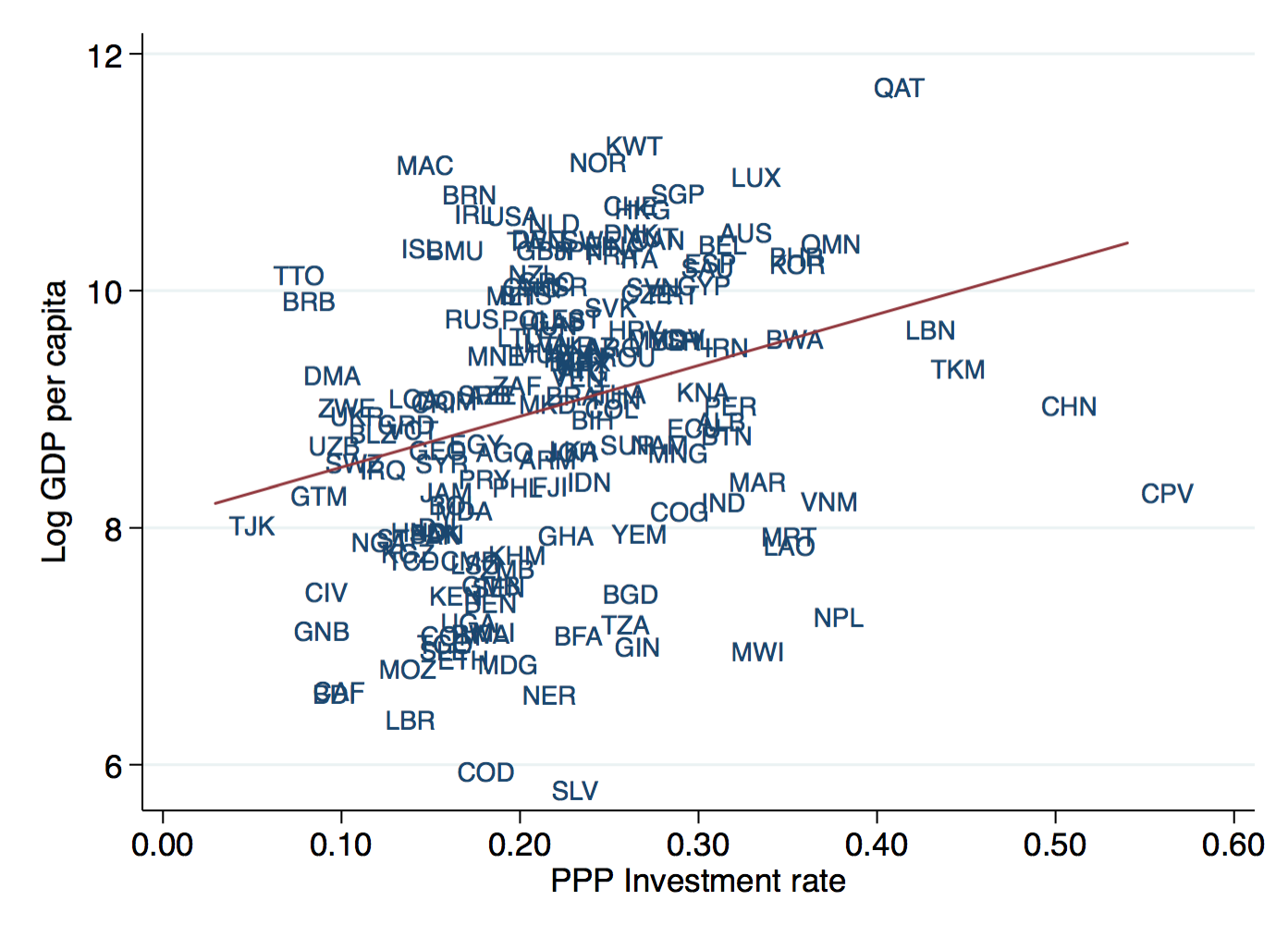 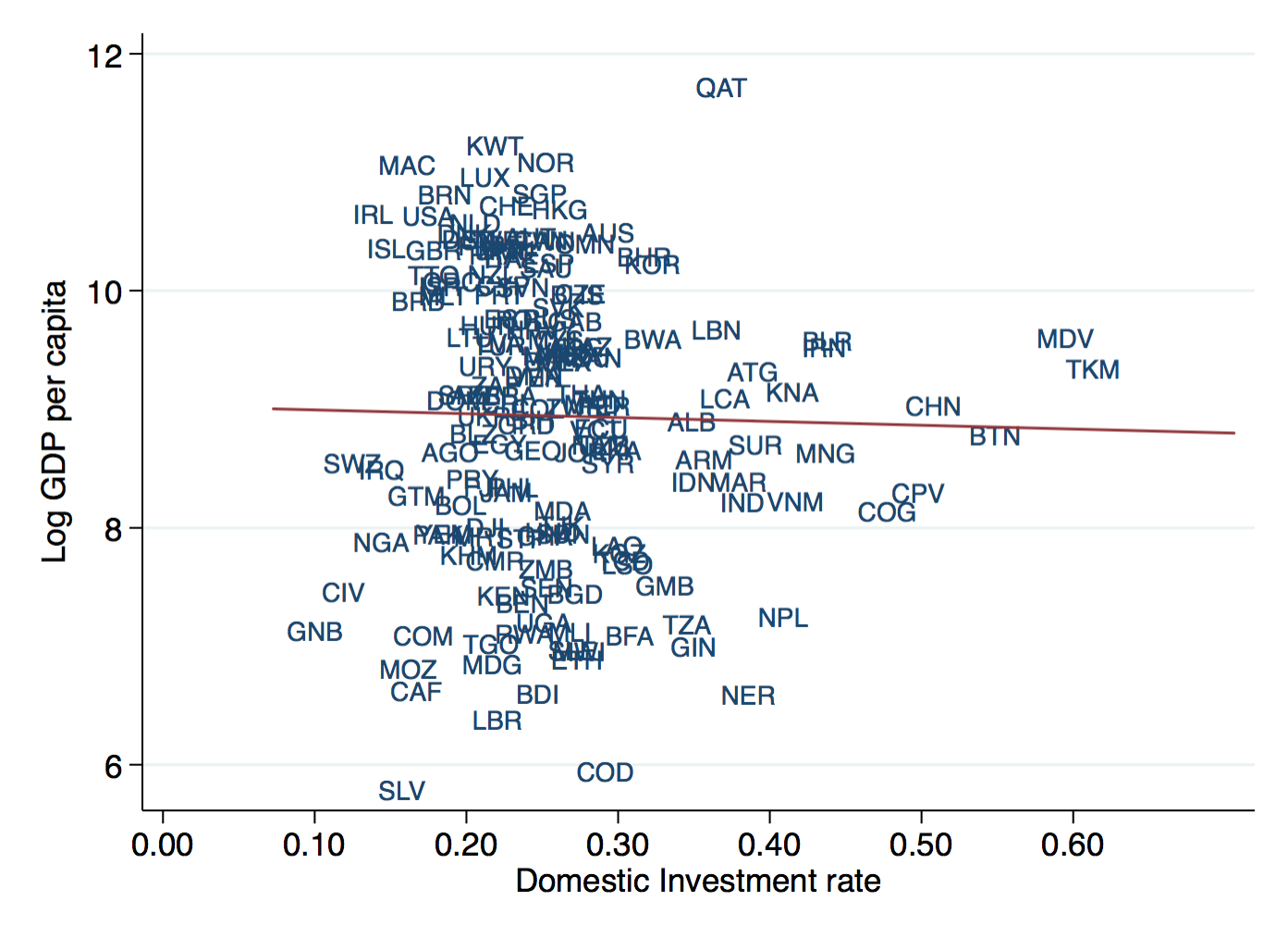 That conditional is crucial. Those regressions are not saying that higher investment rates raise the long-run growth rate of an economy. They are only saying that the level of GDP per capita will be higher along the balanced growth path of places with higher investment rates. The long-run growth rate along that balanced growth path is probably similar across all those countries. If you remember the post I did about convergence and the analogy with people driving down the highway, these regressions tell us that investment rates allow you to move farther up the line of cars, but ultimately you still have to settle in behind the sheriff and go 65.

Why is there a relationship of investment rates and growth? The "Duh" answer to this is that capital matters for producing output. More investment, more capital, more output. What we really want to ask if "Can we describe the dynamics of investment and growth?".

The workhorse model for these dynamics is often called the Neo-classical growth model. It is often the first dynamic model you learn in graduate school, and it sits at the heart of all your favorite (or despised) DSGE models. The Neo-classical growth model goes by a lot of names. I tend to call it the Ramsey model, and will do so throughout this post. It's also sometimes referred to as the Cass-Ramsey-Koopmans model, or more bluntly as the Solow-model-with-endogenous-savings.

In the Solow model, ${I_t}$ is s fixed fraction of output. In the Ramsey model, the choice of how much of output to invest - how big ${I_t}$ will be - is determined by a forward-looking optimization problem, typically with a representative agent. Hence investment and growth are jointly determined in the Ramsey model, and both are dictated by the current state of the economy, which is captured by the current capital stock, ${K_t}$.

For explaining the cross-country relationship of investment and levels of output per capita, the Ramsey model is no better than the Solow model. The Solow says that countries with higher exogenous investment rates (typically denoted ${s}$) will be richer. The Ramsey says that countries with higher exogenous patience preference parameters (typically denoted ${\beta}$ or ${\rho}$) will be richer. This a distinction without a difference. The Solow might be superior here, in that it leaves open any possible reason for investment rates to differ, while the Ramsey forces you into thinking about patience parameters.

What does the Ramsey model predict? That depends on the specific parameter values you choose. You can get the Ramsey model to predict investment rates that rise with output per capita or fall with output per capita if you tweak things just right. If you try to discipline the parameters in the typical way done in macro - a capital share of about 0.3-0.4, an inter-temporal elasticity of substitution of about 1/3 - then you get that savings should fall as output per worker rises. In other words, when a country is below its balanced growth path, it is predicted to save a big fraction of output, and this fraction is predicted to decline as it approaches it's balanced growth path. Basically, the "high" elasticity of substitution means people are willing to invest a lot today (i.e. consume little) in return for lower investment rates in the future (i.e. high consumption). A country below its balanced growth path that invests a lot will grow quickly, and hence the Ramsey predicts that investment rates and growth rates should track each other.

Does this prediction hold up? In some cases, it looks great. Here's a plot of the investment rate in Germany after WWII until now, along with the plot of the forward-looking 10-year average growth rate of output per capita. This looks qualitatively like exactly what the Ramsey model predicts. 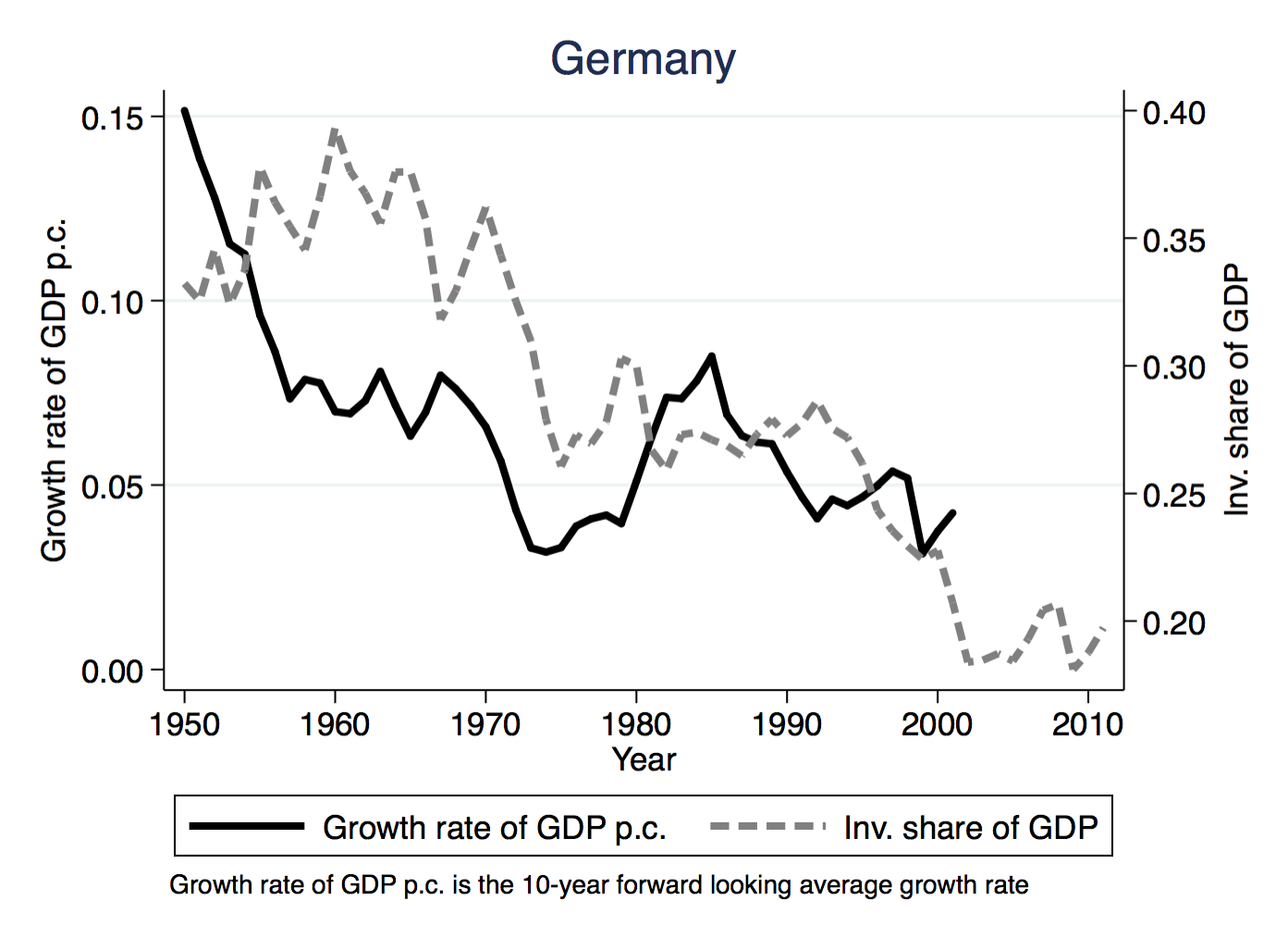 So everything is great, right? Not quite. There are a number of other examples where the pattern actually looks nothing like what the Ramsey predicts. Here's a plot from Japan, and from 1950 to 1980 this works exactly opposite of what the Ramsey says, but perhaps from 1980 forward it works? 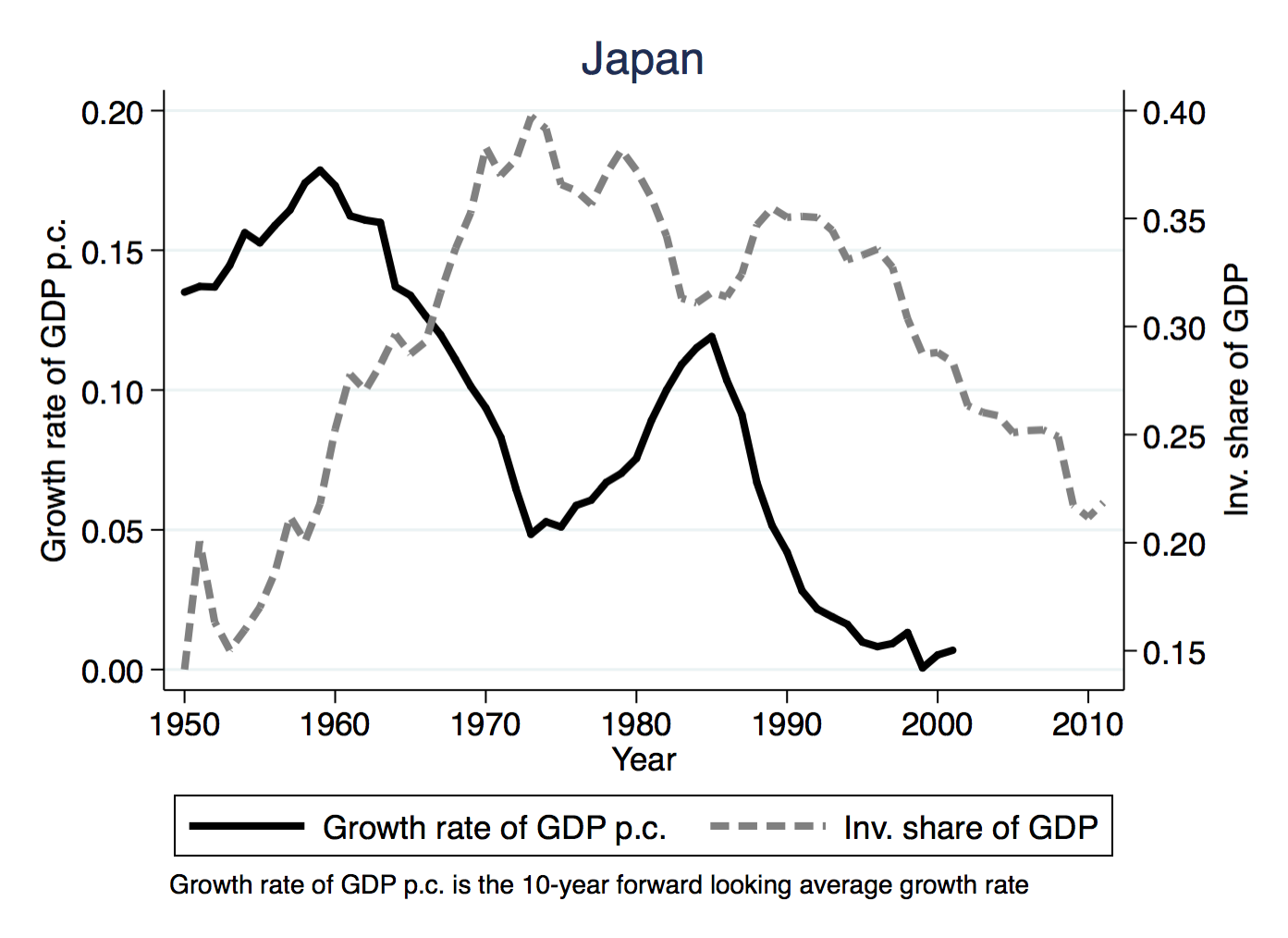 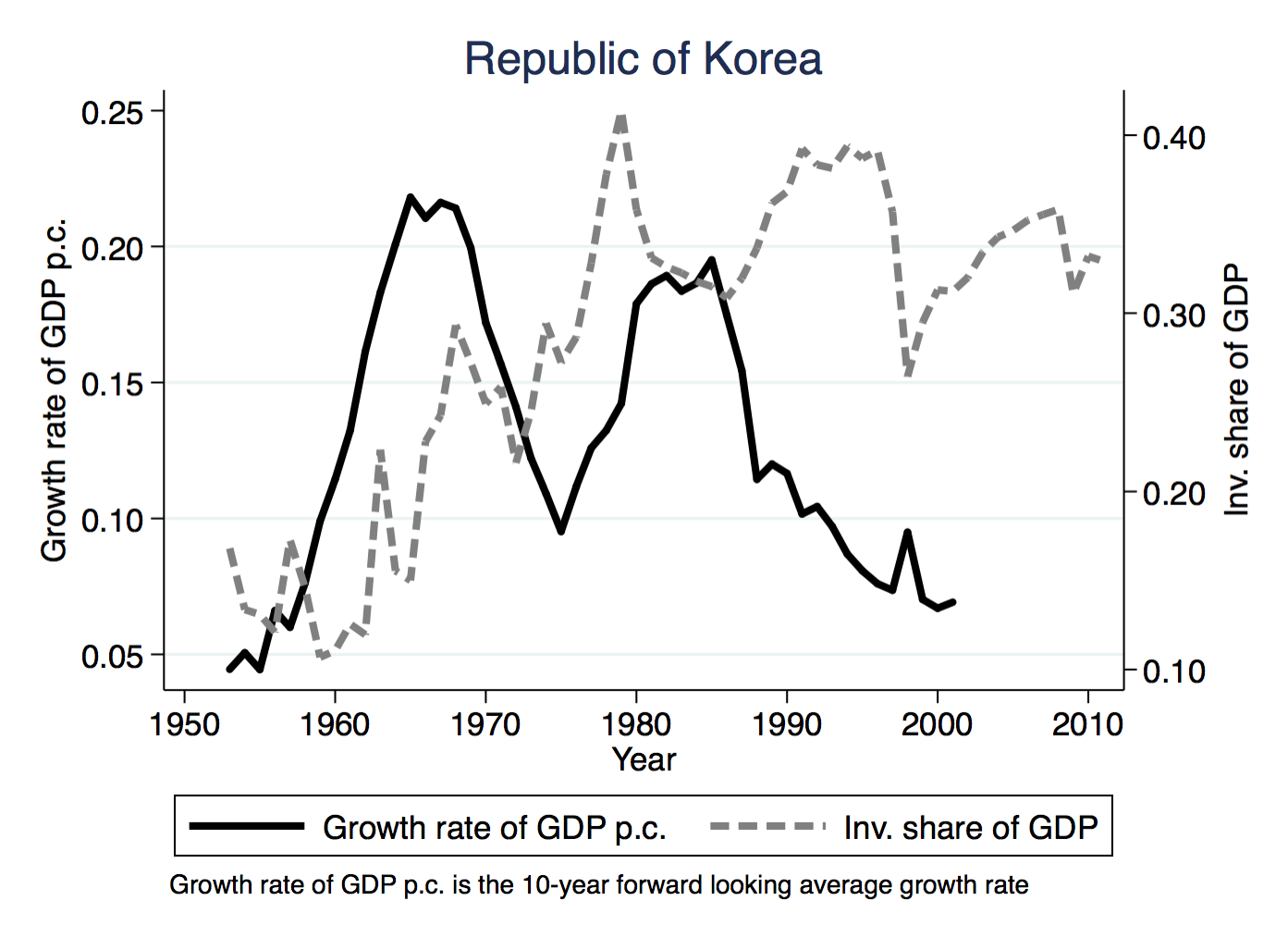 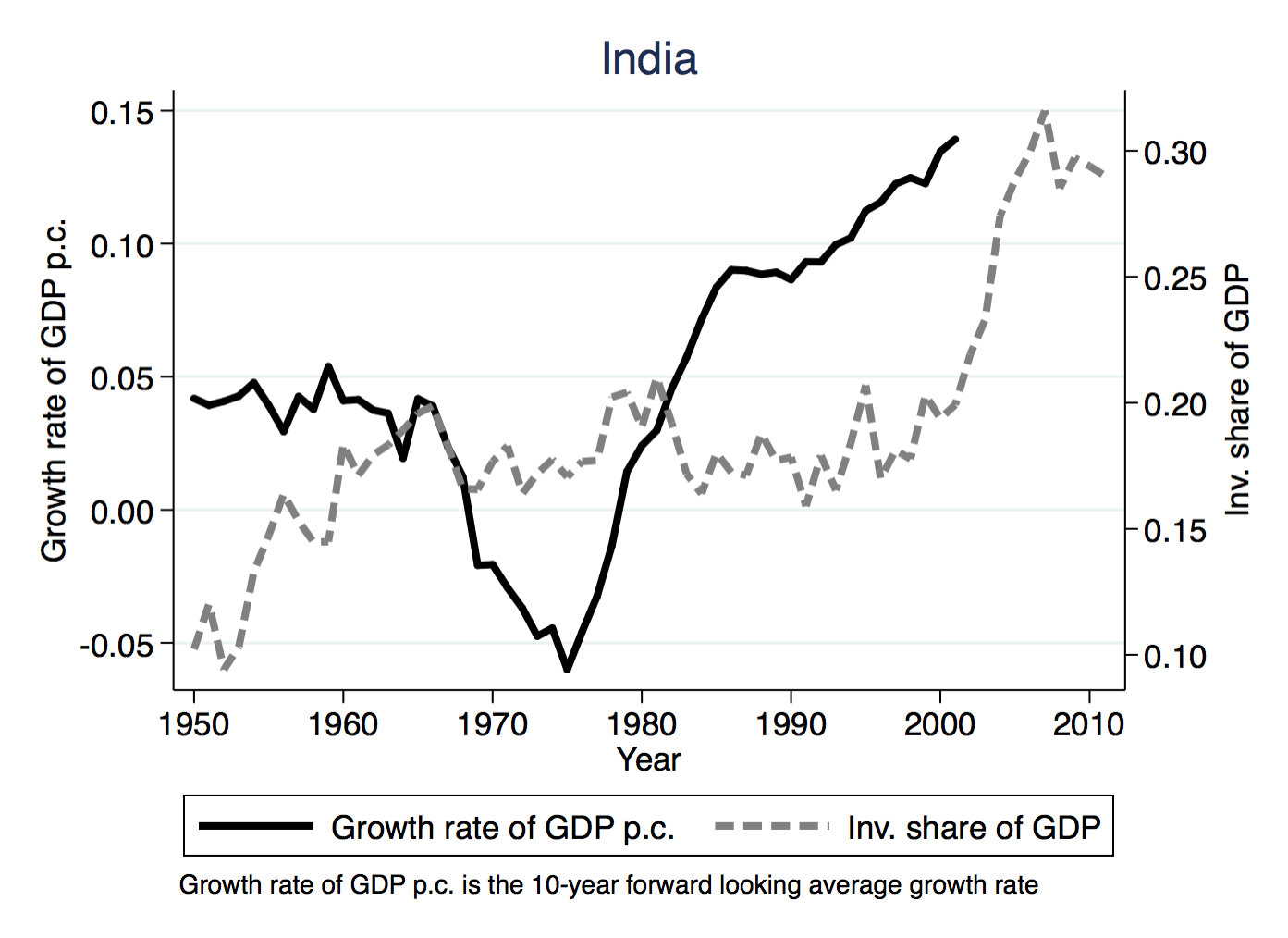 This doesn't necessarily mean the Ramsey is wrong, but to explain these patterns we need to start delving into remarkable exogenous coincidences again. Productivity shocks that happen at just the right time, or unexplained shifts in patience parameters at exactly the right moment.

There's another issue, though, which is that even the Germany figure doesn't match the prediction of the Ramsey model. Under the typical parameters, the Ramsey says that both investment and the growth rate should have declined much faster than they actually did. Another way of saying this is that convergence speeds are predicted to be incredibly high in the Ramsey model. For Germany, given the starting point in 1950, the growth rate should have already dropped to about 2.5% and the investment rate to 20% by about 1965.

I've mentioned before that empirically, the convergence rate is about 2% per year, meaning that 2% of the gap between actual GDP and the balanced growth path closes each year. We find that estimate coming out of all sorts of settings. The Ramsey model predicts convergence rates of up to 30-40% for countries like Germany in 1950. It's not even in the realm of empirically plausible.

So....What exactly is the Ramsey model good for? Off the shelf, the Ramsey is a poor descriptor of the time-series evidence, and is needlessly complex for explaining cross-sectional relationships. But in failing, you can understand what might need to be added to match the time-series data.

To "slow down" the convergence speed in the Ramsey model, for instance, you can drop the assumption that all capital is perfectly substitutable across firms. I did this with Sebnem Kalemli-Ozcan and Indrit Hoxha, and once you lower the elasticity of substitution to 3 or 4, then predicted convergence speeds in the Ramsey become reasonable.

To match the Granger-causation of growth to investment rates, you can break the assumption that preferences are time-separable. This is what Carroll, Overland, and Weil (2000) do by adding habit formation into the Ramsey. Basically, your marginal utility depends on how much you consume today and how much you consumed yesterday. Because of this, your response to shocks is relatively slow, and so when growth ramps up (due to a productivity shock, for example) the savings rate doesn't instantly jump up, but takes a while to respond.

To capture the time-series experiences of places like India or Japan you could appeal to some kind of exogenous coincidence. Just because they are implausible doesn't mean they can't occur. S*** happens, and so the Ramsey could be totally right, just masked by a series of crazy shocks to productivity, preferences, institutions, etc.. The take-away from this could be that you should stop worrying about trying to explain growth as something that has a common process in all places, and focus on explaining the growth of a specific place in detail.

You can also remember that the aggregate data we are looking at is exactly that, aggregate. Which means that it is the summation over millions of little individual decisions, and so the representative agent in the Ramsey model is probably not a good approximation. But saying that you should allow for heterogeneity in the model is a lot like saying that you should study each country individually, as the heterogeneity is going to be unique.