Everyone loves talking about productivity, and how it doesn’t grow as fast as it used to. Very low productivity growth rates, in same cases negative, have been used very recently as evidence of this long-run slowdown and why perhaps it will get worse. But inferring something about long-run trends in productivity growth from a few years of data, especially years that represent a recovery from a deep recession, is probably unwise. Now that I have the 2015 BEA data on sector-specific output and employment, let me try to illustrate what I mean. 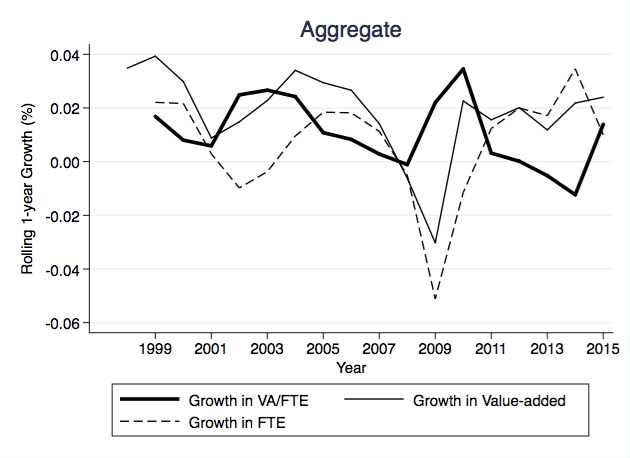 The figure shows the growth rate of productivity (value-added per FTE) as the thick black line, and then also includes the separate growth rates of value-added (thin gray line) and FTE’s (thin dashed line). What you can see in 2013, and in 2014 especially, is that productivity growth dropped to about -2% per year. But value-added growth was still about positive 2% per year, and the entire reason for the decline in productivity growth was that FTE growth was over 3%. Compare that to the numbers from the rest of the time period I plotted, and that is an exceptional number. Labor force growth drove the decline in productivity, purely from an accounting perspective.

Using the BEA data, I can dig backwards into the sector-by-sector contributions to productivity growth. And there are a few select sectors that appear to be driving this phenomenon. First, take a look at “Government”, which includes federal as well as state and local government spending. 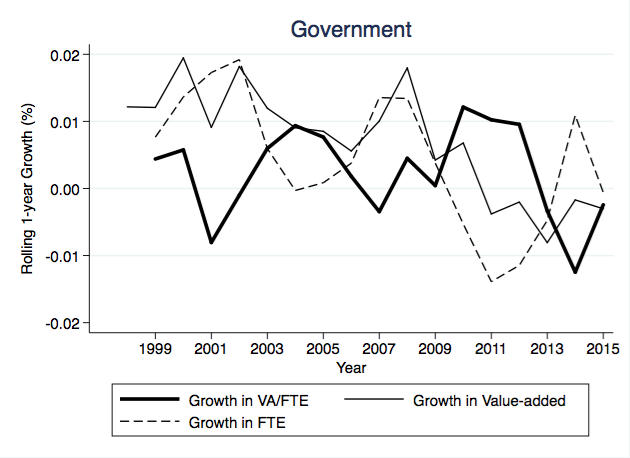 One side note about “value-added” for government. This is going to include both salaries for public employees like teachers, cops, and fireman, and also capital spending like roads, bridges, and other infrastructure. The effect you see in the overall government sector is driven almost entirely by state and local governments. They shed workers like crazy after the recession, and in 2014 that reversed dramatically. Growth in state/local FTE’s went from -1.5% in about 2011 to +2% in 2014. 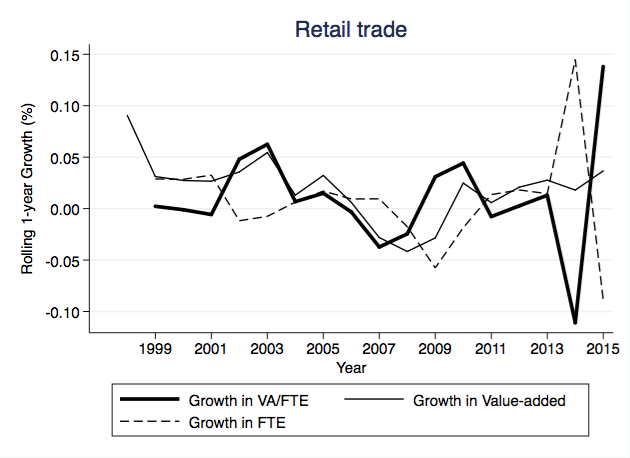 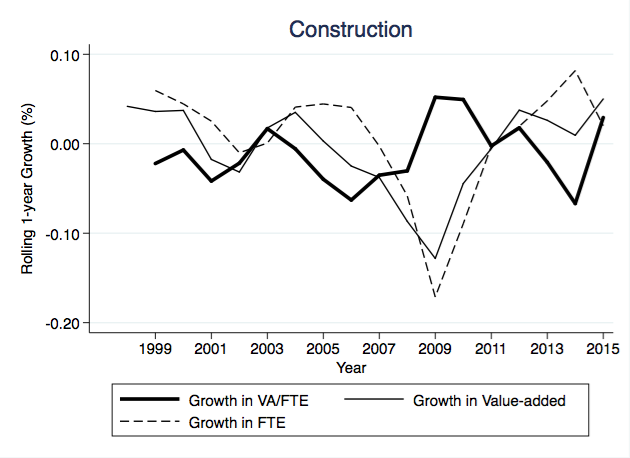 Other sectors have this effect present, but it looks pretty small (Manufacturing, Utilities, Wholesale trade). Some, like transportation and mining, have similarly large shifts in FTE’s, but these tend to act in the opposite direction to those in retail and construction. That is, in 2013/14, the growth in FTE’s was negative, and so calculated productivity growth was very positive. In 2015 recovery in the FTE growth in both sectors is associated with much lower productivity growth, as in both cases value-added growth doesn’t change a lot.

One response to these figures is that this reflects some error in calculation or reporting. And believe me, I’ve gone back and forth with the BEA website to confirm that this is really what they are reporting for 2014 and 2015, and that I’m using the right data. I’ve picked over my Stata code a few times to see if I’m getting this wrong somehow, but this is what the data say. If I was calculating things wrong, you’d expect to see some other odd surges in growth rates in other years, at least for some sectors. And since we don’t, I believe I’m accurately reporting the right growth rates given the BEA data provided.

So on the assumption that these figures are a good representation of what was going on with productivity growth, what does it tell us? The first reaction I have is that this is precisely why you shouldn’t get worked about a single year’s productivity growth rate. In 2014, it was negative in the aggregate thanks in part to retail and government as well as several other sectors. But given that this was driven entirely by a surge in FTE growth associated with a recovering labor market, I don’t know that there is any long-run information here. It certainly doesn’t provide any evidence that innovation is slowing down. Productivity is just a residual, so short-run productivity growth rates will always be subject to surges in short-run FTE growth.

A second reaction may be, if these industries are adding all these FTE’s, then why isn’t value-added rising faster? Does this make sense for firms to hire these people (or raise their hours) if they are not getting more value-added? Perhaps the people they are hiring are relatively low-skill and low-productivity? Think of the Roy model idea I mentioned in a recent post about Alwyn Young’s recent paper. If the people who are being added are relatively bad at working in their sectors - because all the good people already work there - then putting them to work may not boost value-added growth.

If you were feeling optimistic, you might look at this as evidence that innovation is occurring. Perhaps firms have been adding labor quickly because they anticipate needing them over the next few years due to innovations coming on-line. They presumably are somewhat forward-looking, and so maybe this represents firms investing in building up a labor force in anticipation of new markets and new customers? Note that the drop in FTE growth in 2015 does not wipe out the FTE gains of the prior two years. FTE’s are still growing at the aggregate level in 2015, just at a slower rate. For Retail, FTE’s actually did fall in 2015 relative to 2015, but are still higher than in 2013.