Nick Bloom, Chad Jones, John van Reenen, and Michael Webb have a new paper on how productive we are at producing “ideas”, which one can argue are the ultimate source of all economic growth.

The splash graphic from the paper, which I believe made a brief tour of the Twitter-verse a month or so ago, is shown below. It shows that the TFP growth rate (in blue) peaked around the 1940’s, and has declined since then. The axis measurement here is a big funky, as you could see more of the details of this line if they had made the left axis go up to say 5%, rather than 25%. Regardless, the TFP growth rate is smaller than it was in the past, following Robert Gordon’s numbers.

BJvRW measure how “hard” it is to find ideas by looking at what they call “idea TFP”. This is easy to back out from some data. Let’s write the growth rate of ideas (I) as

where the left side is the growth rate of ideas at time t, and on the right-hand side we’ve got the determinants of that growth. $S_t$ is research effort, and here think of the measure of effective researchers. How much work do we put into coming up with new ideas? The second term is $\alpha_t$, which is the “idea TFP”. It tells you how much idea growth you get out of those researchers.

If you tell me the growth rate of ideas (the left) and the number of effective researchers (S), then I (well, the authors) can back out the measure of $\alpha_t$ year by year. And this is what BJvRW do, in a variety of contexts.

What they do first is to equate the growth rate of ideas with the growth rate of TFP (actual aggregate TFP in producing GDP). That doesn’t mean that each idea is equal to one “unit” of TFP, it just means that if the number of ideas grows by 10%, then TFP grows by 10%. This is a big leap - but let’s not get hung up on this. It isn’t important in this first context. With the data from the first graph on the TFP growth rate ($\dot{I}/I$), and the number of effective researchers ($S_t$), we can back out $\alpha_t$. This “idea TFP” is, awkwardly, the “TFP TFP”, or our productivity at producing TFP given a set of researchers. 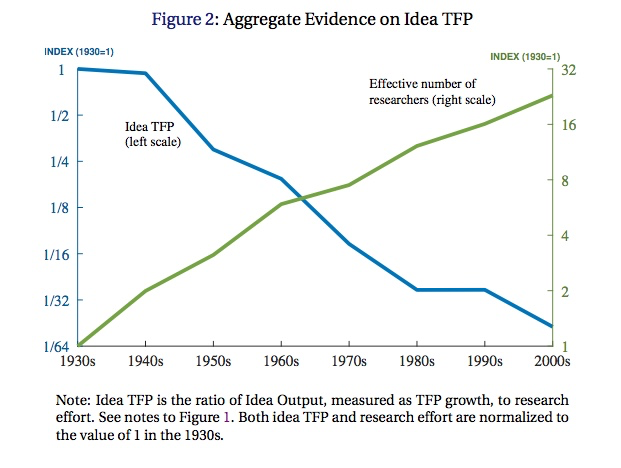 This first exercise using (actual) TFP as the measure of ideas is a bit crude, and what BJvRW go on to do is examine individual industries or types of products to establish that the “idea TFP” is in fact falling within each of these as well. This is relevant because the first result using TFP does not tell us what is happening at the “micro” level. We could have constant (or even rising) “idea TFP” within individual industries or lines of research, and yet in aggregate falling “idea TFP”. It may be that ideas are not perfectly translated to TFP, or it may be that the we are spreading our research efforts over an ever-expanding list of industries or lines of research. In the latter case, idea growth in individual industries/lines may be falling because of the decline in numbers of researchers, not because of declining idea TFP. But in aggregate, this would look like declining idea TFP.

Relative to the first graph, there is no decline in the growth rate of transistors. But there also isn’t an increase, despite the increased number of researchers. What this means is that “transistor idea TFP” is falling over time, at about 10% per year. As they point out in the paper, Moore’s Law still holds, but it takes 78 times more researchers to figure out how to double transistor density than it did in 1970.

From here, the paper works through several other examples. I’ll leave it to you to look at the specifics. But overall, the message becomes clear. For crop yields, idea TFP is falling at between 3% and 9% per year, except for cotton, where it rose slightly over time. For “new molecular entities” (e.g. drugs) idea TFP has fallen to about 1/4 of its value in 1970, or about 3% per year. BJvRW also look at firm size, measured in different ways, which should be related to their productivity (and ideas). In each case, their size is not growing as fast as their RD spending, implying their idea TFP is falling at about 8-15% per year.

The looming question here is whether this implies economic growth is due to slow down to zero. And the answer is “No”. It is possible for ideas to have a constant growth rate (and GDP per capita to have a constant growth rate as well) even if idea TFP is falling over time. For “semi-endogenous growth theory”, a term often associated with Chad Jones, this falling idea TFP is consistent with constant, positive growth in GDP per capita.

This is what is in the Jones/Vollrath textbook (buy 1, buy 10, buy 1000!) when we teach how ideas accumulate. Modify that first equation I showed you to look like the following

where idea TFP is now the ratio of a constant, $\alpha$, and the number of ideas, $I_t$, raised to the power $\beta$. The value of $\beta$ is quite important. If $\beta=0$, then the level of ideas has no effect on idea TFP, and idea TFP should be constant. This is what was in the original Romer model, by the way. What Jones did was to say that this implies a very knife-edge condition, and there was no reason to assume that $\beta=0$. When $\beta>0$, as we accumulate more ideas, the growth rate of ideas falls - idea TFP goes down.

Hence the “don’t panic yet” comment in the title. Falling idea TFP may well be the natural course of things, without resulting in lower actual TFP growth. The observed fall in actual TFP growth would have to come from some other forces involved in generating research effort. Start with an explanation that might imply a permanent fall in the TFP growth rate:

Other explanations might imply that the drop in the TFP growth rate will be temporary:

And of course, maybe semi-endogenous growth theory is wrong. Maybe this just isn’t the way to look at things. Alternative theories might say idea growth could be affected by policies (subsidies for basic research, tax policy regarding treatment of RD spending, etc..) and what we’ve seen is a continuous deterioration of the policies supporting idea generation. This one is a little hard to square, though, just because it seems odd that there would be such growth in the number of researchers if the returns to that research at the firm or individual level were going down so much. I can see how taxes on RD would lower the resources devoted to it, but why would that affect how effective RD efforts are? You’d have to argue that policies were incenting companies to work on useless ideas.